I'll never understand city people, and I'll never become one, no matter what Ma says. It's not the Shin. I like them. They are nice and make pretty things. The people back home that make fun of them are stupid. A Shin androgyne caught me looking at the fine garments in zir booth and might take me on as a tailoring apprentice, even. 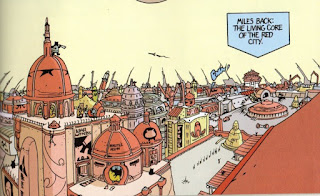 But the Fleshless, them I'll never be comfortable with. They don't call themselves that, of course.

Back home, we thought they were a rumor. Apparently they are sparse in the Hills. But here it seems they're everywhere. I don't know how people live alongside them. I don't know how people bring themselves to their temples. They just make me think about that one's in me.
But they say not. They say not everyone's body gets up and walks after the person is gone. And the ones that do, it's not the person, and it's not a thing til they're dead. But I feel like one's in me, waiting.

Master Ca' says they are the blessed of the Sun God, that is why they run the temples, that is how they heal the fleshed. It makes no sense. How can you worship a sun without eyes? How do you heal flesh when you have none?

Master Ca' is stupid and I hope the Shin takes me on so I can get out of this stupid meat house. I mean, the one I work in. Yes, I am strong, but I don't want to haul around dead animals. It keeps us in good meat though. Ma says we couldn't have meat at all most times otherwise, and to be glad I'm not under the ground in the Crystal Mines back home. She says the glow gets in your skin after awhile and you get strange.

There's a fetching lad at the pub who's young, my age. Maybe Ma will take us there again this ha'mast.

Anyway. I wish there were Irongens here. Some back home don't like them, say they take jobs from us, but that's small-sighted. They help us and do work we couldn't even do, sometimes. I just miss their metal tang smell, their squeaks, their reassuring bulk. You always knew they were around by looking up for the steam or smoke. I didn't fear wolves or bears or foreigners or nothing with them around.

Apparently as the Fleshless are rare out by us, the Irongen are rare outside the Hills. Nobody can explain the reasons things aren't the same all over. Nothing makes sense anyways, I guess. Ma says us being here in the damned city is keeping the Empire out of our town, but I don't see how.
Posted by Josietron at 2:34 PM