Discussion of the game Banana Chalice on this Woodland Secrets episode spawned an idea in my head, mostly fully formed about what might be a fun hack of LotFP or DnD. 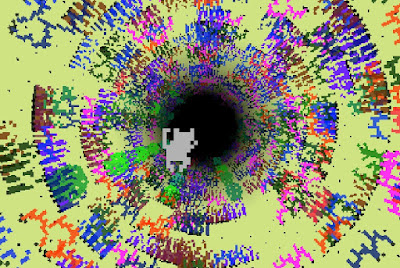 The essential idea is that the PCs die at the end of every session, no matter what they're doing or where they are, and "spawn" again anew at the beginning of the next. The world, however, doesn't reset. The PCs carry no XP or items from the last time, but whatever effects they had in the world happened, items they hid are still hidden there, etc. Of course there would be some metagaming even if players tried not to, so maybe you have a vague memory conceit to the next "clone" or however you're explaining the situation. Or just have the new character know stuff.

It's kinda like the original Aeon Flux shorts except instead of anything having to actually kill you, you just inevitably explode at the end of the session like the cats in Banana Chalice. Players could try a new character or use the same PC reset to 0.

Having discoverable items that play with the premise could be fun - finding an item that determines where the next batch spawns, for instance.

I think this idea plays best with low-rules-buy-in, which is why I thought of Basic. It might only be fun with DCCRPG, for instance, with a veteran group that knows the ins and outs of that system by rote and can make characters easily.
Posted by Josietron at 3:47 PM