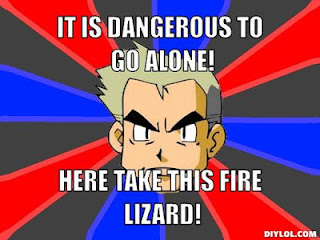 To break up the tedious stuff: I rolled a 1d6 and looked at the Contents table here. If I rolled a 6 then I rolled 1d4 on the Contents table here. Then I counted up the listings in the appropriate section and generated a random number. If the section broke down into subcharts, I'd roll on each and work my way down until I had a specific critter. Wikipedia is really full of Contents Tables that could generate random stuff for your campaign!
Anyway, now I embark on a series of posts about the hypothetical campaign world with the following as the primary intelligent races: Giant Otter, Giant Beetle, Kobold, Fire Lizard, Harpy, Frost Giant, Sirenflower, Crone of Chaos, Marilith, Red Dragon, Treant. Humans may exist as naked, dumb savages, but I didn't roll them, so they won't be intelligent! Not all of what I rolled are practical for PC races, but I got some inspiration for the Fire Lizard. What do y'all think? 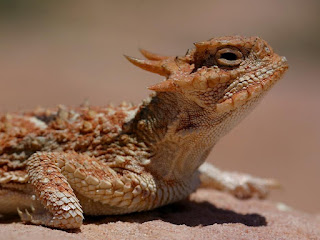 
FIRE LIZARDS
Ecology
Young Fire Lizards are 8-10 ft long with grey, red, brown, or black patterns. After the change (see below), they are about 30 ft long and darker. Fire Lizards have roughly human intelligence until they are (40+3d10) years of age. At that time, they become ravenously hungry, eating 1.5 times their body mass daily, growing three times their size in a year, and laying 1d4 eggs. The trauma of this transformation and the chemical changes involved leave them with little more than animal intelligence, highly territorial and violent in the extreme.
Which is to say, young Fire Lizards are bored as hell. The elders can barely communicate and all the books and art objects get burned whenever one of them goes through the 'change'. The other creatures of Kalak-Nur's vast central caverns and tunnels are not much better, being either pompous, greedy, savage, or otherwise unable or unwilling to intellectually engage. Making ash paintings on cave walls with your breath gets old.
When the easy life they have in their familial pits of lava and stone become too much to bear, some young Fire Lizards head out for adventure. They begin with little knowledge of life beyond Kalak-Nur's central volcanic mountains and tunnels, and are just as likely to emerge in the verdant, rainy, and highly settled east as the dusty, more sparsely populated deserts to the west. Other intelligent races are used to this and welcome the labor companionship, but grow wary the older the Lizard gets. Fire Lizards among society will pay other creatures to read to them or construct book harnesses to hold tomes in front of their faces.
Knowing their eventual fate as huge, savage monsters tends to lead Fire Lizard adventurers to either a grim, fatalistic determination, or a dry, savagely dark wit. Gallows humor is frequent. Some say knowing that their intelligence will some day flee them gives their intellectual relationships a poignancy and bittersweet fervor. Most are intensely loyal to the companions they meet, although some prefer to trivialize intelligence by tricking other races into trouble and strife. Still others revel in physical mastery, creating fleeting surface kingdoms of fear and pain.
When they feel the change coming on, most make a trek back to their fiery ancestral tunnels beneath Kalak-Nur's central mountains. Those of a crueler bent head to heavily populated surface areas, taking their chances for a greater guarantee of edible fodder. 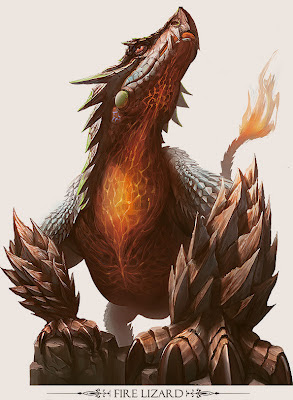 (Stolen from this guy's awesome DeviantArt. If you are that guy and you want me to take this down, just let me know.)

Being giant lizards, they have no articulated digits and must support themselves on at least three limbs at all times. If on less than 3 legs, the Fire Lizard must make a DEX and STR check per round to remain upright.
A Fire Lizard PC cannot pick anything up except in its toothy, smoky maw. They cannot use weapons, and can only use armor specifically made for them. They are restricted to magical bracelets, rings, and crowns, which can be secured on their horny protrusions.
Fire Lizard PCs may carry 1 humanoid on their back for every point of STR over 10 for 1 hour. (IE STR 15 can carry 1 person for 5 hours or 5 people for 1 hour.)
A Fire Lizard PC's attacks progress as indicated:
Level - Attack
1 - Claw 1d6, Bite 1d4, one attack per round but reroll misses once; second hit must use different attack
3 - reroll 2 misses per round; can breathe smoke that obscures vision in a 10' radius 1/hr instead of an attack; all creatures -2 to hit and hiding/sneaking is doubled in radius; maintaining uses attack for the round
5 - gains a second attack per round if DEX over 11; can breathe fire for 2d4 damage every three rounds
7 - smoke radius is 20', fire damage is 2d6; gains a second attack per round if did not at lvl 5
9 - fire damage is 2d8

Fire Lizards must sleep for 8 hours or suffer -2 to all rolls the following day. Fire Attacks are almost useless against them: At levels 1-5, they receive a bonus to saves vs fire at double their level; after level 5 they are immune to nonmagical fire attacks, and suffer half damage from magical fire attacks if they fail their save (no damage if save). 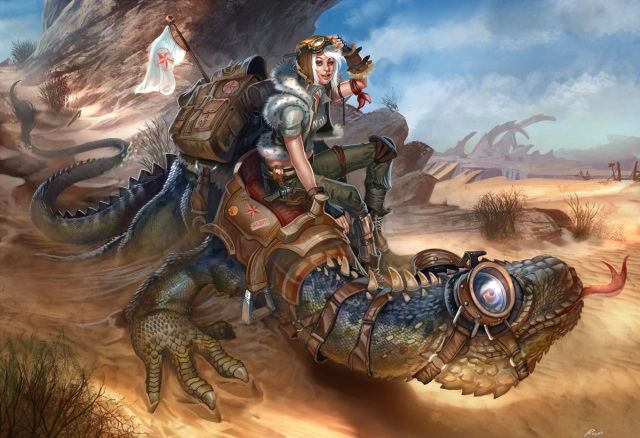 "We are the best of friends!" "Get the fuck off my back, cow." (from here. If you are the artist and want me to remove this, just let me know.)
Posted by Josietron at 10:33 AM