Frost Giants in the 1E AD&D Monster Manual are 15" tall albino vikings. SNORE! That's like, almost not fantasy. There are almost real people like that. Here's my fucking Frost Giant.

"To the south, beyond the Bottoms, there is a land of ice where the sun never shines. Well - almost never! The old ones will tell you: every few hundred years the sun wobbles in the sky, light shines on the giants there, and they wake.
Tall, taller than you can imagine! Stack a hundred star-ships on top of each other, then place them on a mountain! That is the size of the wall of ice that will come for you."
-Accounts of Superstition Gathered by Gibberous Cantankerous, Explorer, While Trapped on THEE DRED MOONE 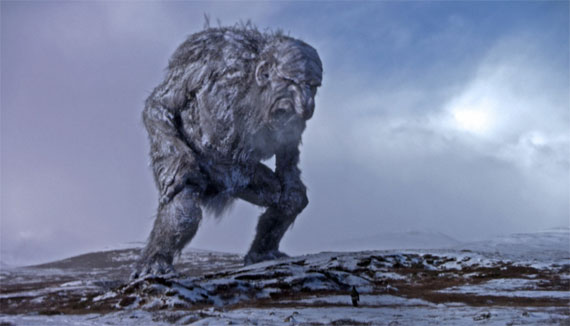 picture from the awesome move Trollhunter

The planet will wobble on it's axis for one revolution every few hundred years, causing the sun to shine into the frozen land to the south for some months.
When awakened by sufficient warmth, Frost Giants will seek the largest nearby gathering of warm-blooded creatures and attempt to eat 1-2 times their own HP in creatures, going from gathering to gathering until this is fulfilled or repelled by great resistance. They are aided in this by Ice Goblins, who wake up several months before the Giants, scout out local settlements, and weaken defenses and significant weapons through stealth and violence.
Once they have eaten their fill, Frost Giants return to their dim frozen wasteland and begin regurgitating up to half of the half-digested viscera onto the snow and ice. Then they sit, sculpting creatures from the mix of snow and viscera with astonishing detail and delicacy. They will shape their own fingers of frost into various tools to sculpt more intricate work.
As the planet wobble corrects itself, the land cools and becomes shrouded in darkness once more. The Frost Giants return to their long torpor, while these sculptures contract and shrink in a curing process, and wake as Ice Goblins at the next warming (as above, months before the Giants awake). The land where these creatures originate never truly thaws, and is so cold no living creature has explored it. It is said that even undead cannot tolerate the extreme temperatures.
It is rumored that in past times the Frost Giant awakening and massacre was prevented using certain rituals, and that they are vulnerable to music. 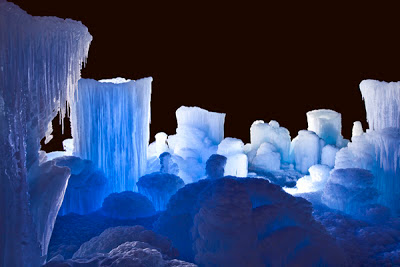 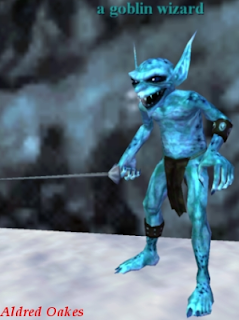 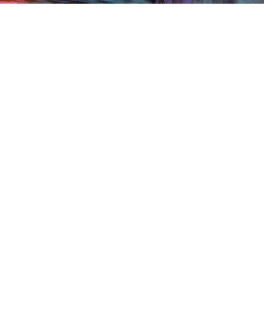 Ignore the text. The internet is stupid. What are they doing, rave dancing?

ICE GOBLINS
Movement: 90' (30')
Armor Class: 7 (/13)
Hit Dice: 2+5 (scale up as needed)
No. of Attacks: 2 (Attack Bonus +3)
Damage: 1d4 claw or as weapon
Morale: 8
Special Abilities: Icewalking - can move on ice as if solid ground, walk up walls, stick to ceiling, as long as it's ice;
Snow Vision - see in snow as if clear;
Cold Touch - anything touching takes 1 damage/rd cold;
Hide in Shadows/Move Silently - as 6th level thief;
Devious Intelligence - wakes up with instinctual understanding of humanoids, mechanical devices, weapons, etc as ancestral memory, intelligent and cunning
Construct Immunities - as they are sorta constructs, Ice Goblins get saves VS Sleep, Charm, etc even if they normally wouldn't, +4 to those saves, and the effect is halved if the save is failed with no effect if it is passed. 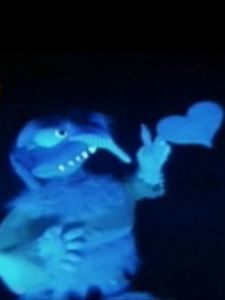 Ice Goblins serve the interests of the Giant who made them. It is rumored that a magic user can bind them if certain rituals are performed and alchemical substances applied before they wake up.
If their bonded Frost Giant is killed, the Ice Goblins hold no obligation to other giants; they usually go form a tribe somewhere. It is highly doubtful they can breed on their own, and these tribes are usually short-lived. 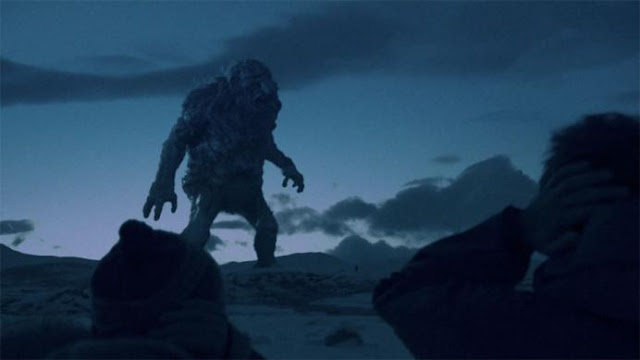 FROST GIANTS
Size: 100-400 ft
HP: 150-450 (HD: 19-45, MEGAHD = 1 IE ignore hits of less than 10 damage)
Movement: can move its own height in feet per round
Armor Class: 0 (/20 ascending), 5 (/15 ascending) at joints
No. of Attacks: 2
Damage: 2d6 +10 Cold
Morale: will attempt to leave if reduced to 1/4 HP or sufficient fire
Special Abilities: On any successful hit by a Frost Giant, the target makes 2 saves: 1 VS REF/DEX to dodge for half damage, 1 VS CON to either be pushed back 1d20+5 ft or be knocked prone (Save succeeds: player chooses; fails, DM chooses). If the PC is climbing on the Frost Giant, this is ignored.
They have several abilities similar to White Dragons, due to being made largely of cold.


Blizzard Can use its breath weapon to create a blizzard in the area around it as a standard action. This creates heavy snow conditions in a 50-foot radius for 1 minute, centered on the giant. This snow slows movement (4 squares of movement per square entered) and limits vision as fog does.
Cold Aura Radiates an aura of cold. All creatures within 10 feet of the giant take 1d6 points of cold damage at the beginning of the giant's turn.
Freezing Fog Can use this ability three times per day. It is similar to an acid fog spell but deals cold damage instead of acid damage. It also causes a rime of slippery ice to form on any surface the fog touches, creating the effect of a grease spell. The giant is immune to the grease effect because of its icewalking ability. This ability is the equivalent of a 6th-level spell.
Icewalking (Ex) This ability works like the spider climb spell, but the surfaces the giant climbs must be icy. The giant can move across icy surfaces without penalty and does not need to make Acrobatics checks to run or charge on ice.
Snow Vision (Ex) Does not suffer any penalties to Perception checks while in snow.

Frost Giants sight has a temperature component, making most invisibility useless against them.Under a 15ft crust of ice, some of their internal workings are closer to what we'd think of as flesh.
Frost Giants take 1.5 damage from fire, and double damage from sources that cause structural shattering.

Some great "big monster" rules useful here from Scrap Princess, Zak Smith, Roger. I heartily encourage their adoption if you use these guys.
Posted by Josietron at 12:09 PM