There is only The City

I'm working on too many things to run games for at least another month, and don't have the spare brain cycles to make new posts, but I thought I'd raid my drafts folder for interesting almost-finished things, polish them, and dribble them out over the next few weeks, probably Mondays.

Things keeping me busy, if you're curious:
-drawings for winners of The Crystal-Headed Contest,
-a sandboxy historical-fiction sci fi adventure that may get published at some point,
-ideas for a new setting that I'd run in a home game and online simultaneously that's quite different from what i've run before, but also similar,
-and non-gaming related comics and stories.

I wrote the below in 2012 and here it sits, a draft still. I feel like I posted this at some point, but can't find evidence of that, and so here - I hope it inspires someone. I posted some tables I wrote to go with this prompt last year.

The mad say there is a city outside time; that it is some obscure mechanism of time. Ugly at first, for one has most often reached it through that dull, monochrome waste which surrounds it, The city's many colors become comforting and familiar after long hours. The mad describe this City as a repulsive mental embrace, squamous and cold, into which one settles as it becomes warmed by one's own heat; a wrinkle of the mind whose very cloying nature becomes respit.

Sages and scholars who have studied it claim that all who travel between worlds appear in the City, as a patch of light or shadow, an instant too short for the traveler to notice. Finding a way to linger a moment longer, they would find it strangely familiar, adventurers and devils both, though they could not say why.

Sages and scholars claim there is much to be gained in the City: great knowledge, deadly weapons, odd treasures, ideas out of time. Perhaps the City lies at the heart of all things, and if one found a reliable way to reach it, one could traverse time and the planes at will. Without a doubt, those who claim knowledge of The City are mad. Their minds could not contain what is in the cracks between worlds, and have ruptured. 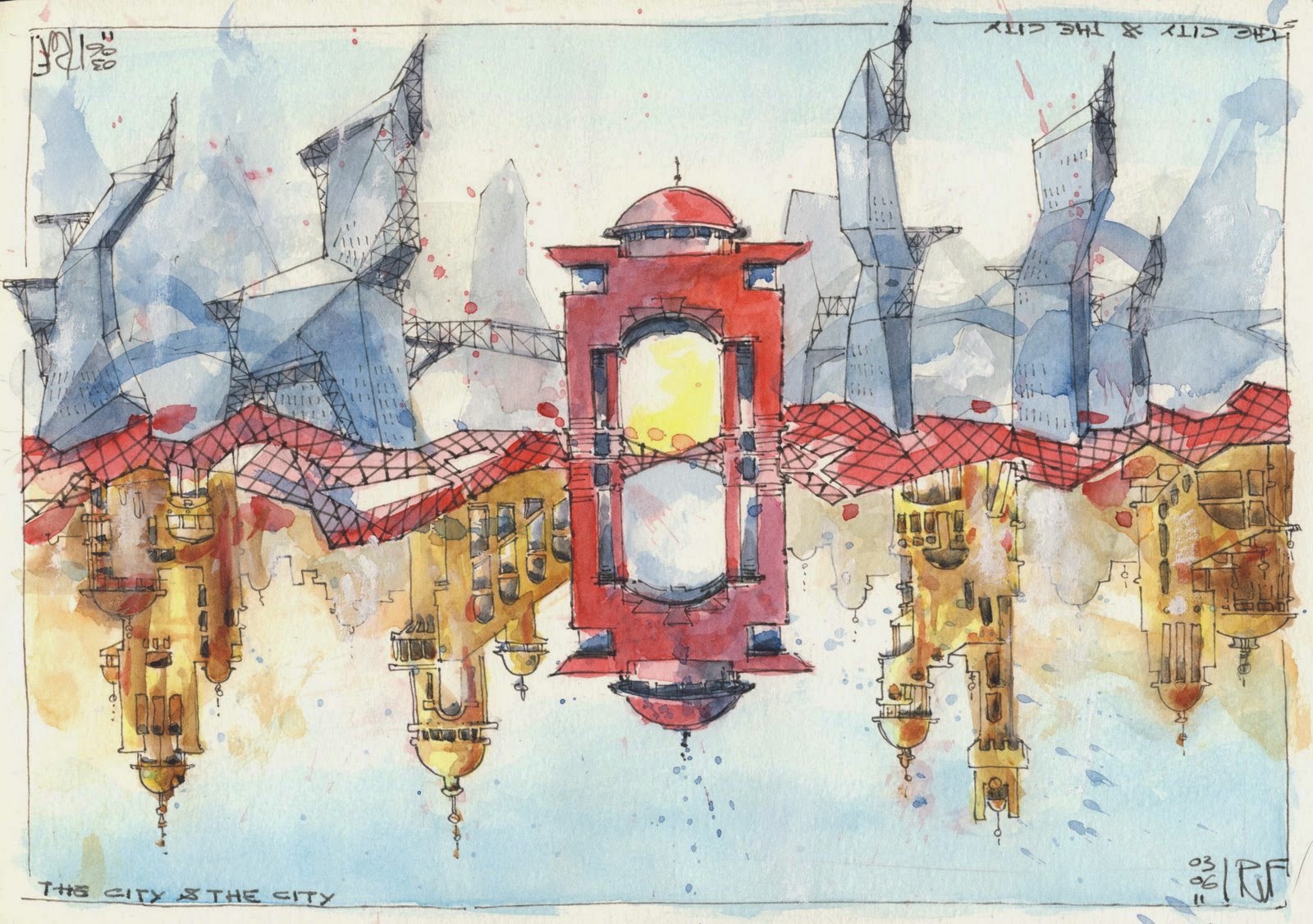 Fan art by René Fijten for China Miéville's The City and The City.

One such sage now requests your attention. Beneath a lonely mountain he believes he has located the lost mechanical city of Abah-tai. It is not the City of faded color described above, but Garallur believes the ancient Abah-taiese had found some trick, some mechanism for traveling Between; indeed he claims they could visit The City at will and had established trade with other planes. Garallur needs adventurers to accompany him into the mechanical city and discover what lost technologies there may be. He offers pay, and the lion's share of whatever wealth or weapons are found.
Abah-Tai was lost at the height of it's power an age ago, sunken beneath the ground in a momentous geological event. If you are successful, you could be the first sane person in a millenium to find the secrets of not one lost city, but two.