+Jez Gordon reminded we FLAILSNAILers to fill out our section of the FLAILSNAILS quarter, so here I go -
J-L is empty courtyards and alleyways alongside the Red Lion, Hair Dresser, Leper Hospital, and Furrier. The Leper Hospital and Furrier seem to be part of the Bellowdecks Inn. All of those actual establishments are under someone else's initials. (I will add drawings to this post at some point)

GROUND FLOOR
Somehow, a number of useless retches actually manage to sleep in the noxious open area behind the Bellowdecks Inn called "The Reek". As this "courtyard" borders the parts of the Inn housing a furrier and a leper hospital, terrible smells abound and foul fluids run in well-worn rivulets through the damp muck and patches of hard stone. The presence of those stones indicates a past of well-kept footpaths and a gazebo all fallen into ruin. During the day, the homeless retches disperse and the open area of "The Reek" is home to animal skinning and impromptu surgeries on unfortunate persons, often at the same time.
-currently sleeping there at night: Dallas (male pleasure droid from Barovania), Bramski the Goblin Rider (shady looking human with a penchant for sneaking and riding enemies)

-dipping bare flesh into or drinking combined runoff from leper hospital/furrier: 1-75 contract a horrible disease (see various Santicore entries), 76-86 mutation, 87-93 heal 1d3 HP, 94-100 save VS Death or die; if resurrected, will be as furry animal

The Red Lion's outer courtyard is secluded and isolated from the public areas, but heavily patrolled by the establishment's special guard - all of whom are deaf, well armed, and well paid.

Occupying one seat at the Hair Dresser is Graxi Toth, a psychic floating octopoid who uses her tentacles and colorful secretions to give unique hair styles to select clientele.

Those passing in the alley should be wary of furniture falling from above.

SECOND FLOOR
A series of rooms perches like a spider at the intersection of alleys. Support beams extend from the courtyard walls of the Red Lion, hairdresser, and Bellowdecks, and an intricate and confusing series of ladders and ramps extends to all the surrounding alleys and courtyards. Guests and intruders often become lost in the network of slides and ladders, ending up on a much higher floor than intended, or having crossed the entire alley to the courtyard on the other side by accident without ever finding their intended room.
From the outside, the rooms appear to be wooden shacks, but guests of the vat-spawn Bascomb Blightchurch talk of elaborate and lush furnishings...and his loving care of various traps and secret panels.

To generate traps, see the excellent Generative Mechanical Trap Tables by Noah Marshall on page 64 of Secret Santicore 2013 v1
In addition, Bascomb's treasure room is behind a false wall with a carving of a demon's face on it; to slide the wall aside, one must put their arm in the demon's mouth. Anyone who does not have a hollow compartment in their arm will not only not open the room but have their arm broken by a metal bar, putting them at -4 to hit until it is healed.

Dame Takahashi Narue and her retinue of 5 workmen have sparse accommodations, something between a barracks and zen temple. She runs combat and mindfulness exercises for those willing to attend.

THIRD FLOOR
Luxx, youthful vagabond of Vertique and "borrower of luxury goods" lives amongst his growing library of books (philosophy, supernatural, naughty stories), hidden jewelry, and empty wine bottles. Some can hear his cries as he dreams of giant men made of metal and ghosts that stalk you through your dreams.
Luxx is occasionally joined by Fritz, who is rarely in his own room, but more often found in the pubs, or the street. Fritz is an aging cleric of Derketa, goddess of death, the harvest, and secrets, who demands her followers gather stories of all of life to bring to her; Fritz obliges. It keeps him too busy to clean or attend to his lodgings, however.

FIFTH FLOOR
Errant soldier Rakkal left as a human from Calian, returned as a being of radiance, and more recently returned as a cat-person. She's been throwing furniture out the window and having hammocks, stacks of boxes, and an indoor garden of catnip installed. Humanoids who are particularly short don't like the way her eyes follow them. Her armor seems to stand guard when she sleeps, which is often.
Drawings of her former unit, "Calian's Lost Battalion" litter the floor, the faces never finished.

Long ago, a white elf lived on a hunter's perch on the first floor, tracking passerby as if they were game. The erratic mechanical being Dread Noslum relocated that hunter's perch to the fifth floor and has been building strange and winding platforms and hallways off of it, some leading to nearby roofs (and reportedly, somehow, local basements), some leading back to his platform, some leading to open air. 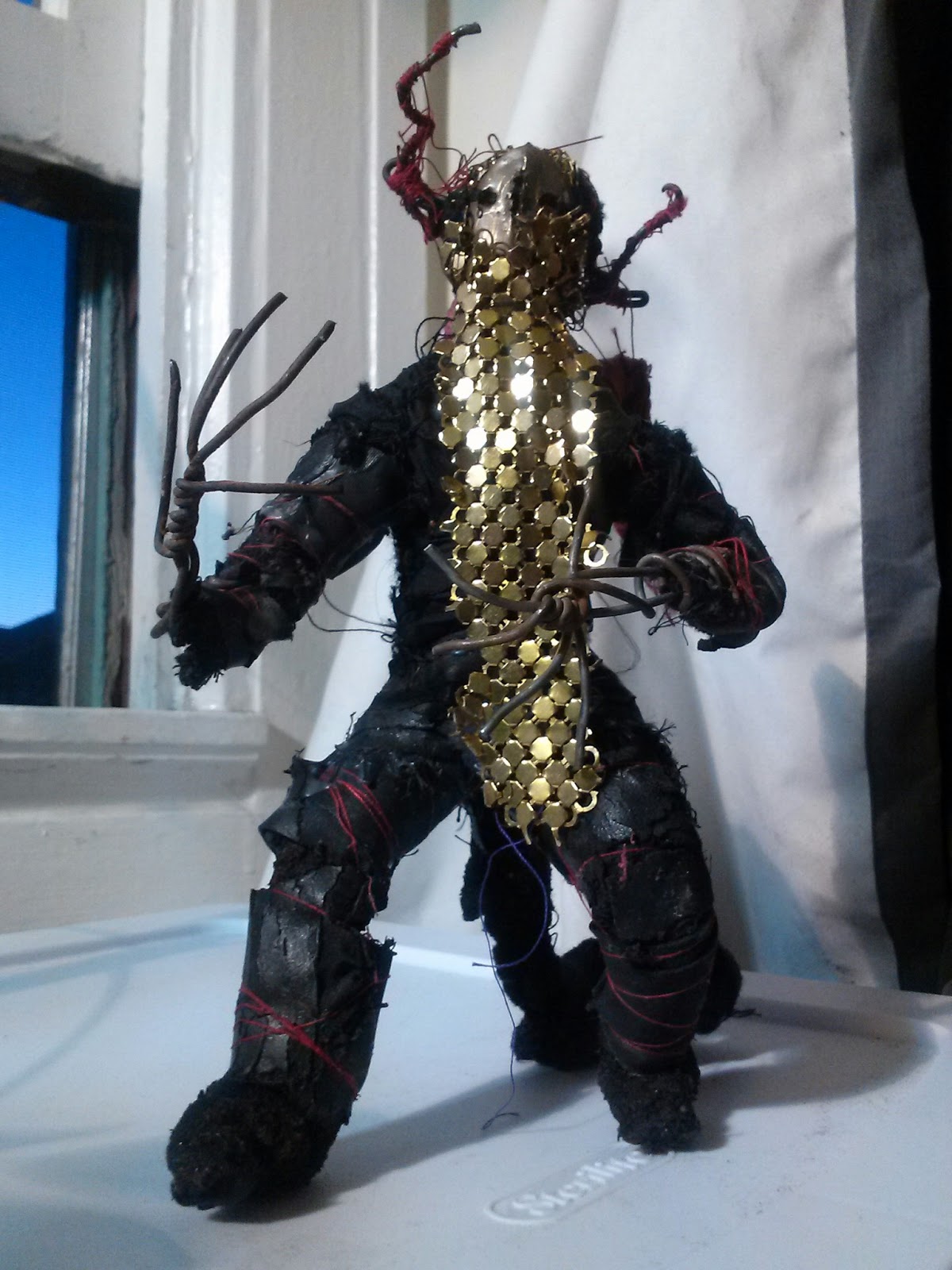 I went on a platform without guidance and ended up...
1. Outer courtyard of the Red Lion
2. Back on Dread Noslum's perch
3. Roof of the Red Lion
4. Basement of the Red Lion
5. Roof of the Hair Dresser
6. In a chair at the hairdresser (how did...HEY WAIT)
7. "The Reek", back courtyard of the Bellowdecks Inn (see "Ground Floor", above)
8. Roof of the Bellowdecks Inn
9. Meeting room of the Bellowdecks Inn; all doors hidden and locked (50% trapped)
10. middle of the Leper Hospital
11. Basement of the LIBRARY
12-14. open-air drop (6d6 damage fall)
15. a cell at the PRISON
16. a cell at the ASYLUM
17. subterranean meeting room, sewer exchange, and temple to SOLICRON LORD OF CHAOS
18. a cloud that seems to support your weight. How did you get so high up? Hey, there are some coins floating above that other cloud...I bet if you jumped you could juuuuuuust reach it.
19. roof of the clockmaker (map area p-x)
20. The Some-Times Room (EDITOR: I'm eager to see what this is, get to writing you T-E's or T-D's!)

There is a 30% chance the platform you traversed is available for backtracking, -1% for every platform previously traversed. Traversing a platform takes 1d20 rounds, and random encounters are checked for using the "Astral Encounter Table" on page 181 of the AD&D 1e DMG. All creatures are chaotic and bored.
Dread Noslum's treasure, maps, magical sword, and other detritus are left in piles on the hunter's perch. The ladder from lower floors requires a DEX-6 check to reach from the platform, missing it causes a 6d6 damage fall.
Posted by Josietron at 7:54 AM