This was originally posted to G+ as a response to Scrap Princess' MONSTER, MARVEL, or MYSTERY challenge. I wanted to archive what I wrote here to be able to find it easier later, as I want to put each of these things in my games. Feedback is welcome, and use the ideas at will (but not to make money). 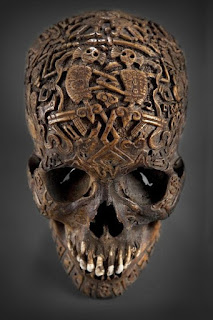 LABYRINTH: Upon the coronation of a leader, the tribe of Nogoaway sends a child under the age of 10 chosen at random from among the villagers to enter the Labyrinth of Death Follows, then barricades that entrance. When the child emerges from the Labyrinth, he or she is the new leader and the old leader is sent back inside, never to re-emerge. It often takes many years for the children sent inside to come back out, sometimes decades. Nogoaway leaders never speak of their time in the labyrinth, and it is unknown what they eat, do, or learn there. The tribe is known to be successful and have good leadership.﻿

(Claytonian JP suggests, excellently: "Each leader's skull has the route etched out upon it. Not that anybody has ever been allowed to see a decomposed leader...﻿")

ORACLE: The Oracle of Weeping is a severed head and hand with a spirit bound inside who must attempt to answer questions asked of it. Only the hand and eyes are able to move, so it is only able to give answers by using it's hand to manipulate the face. The hand is usually bound to the head one one side or top to keep them together. The spirit often becomes frustrated at it's communication limitations, so answers will be shorter and more terse as the interaction wears on. The spirit is said to know of the future, the past, and can see what is happening far away. 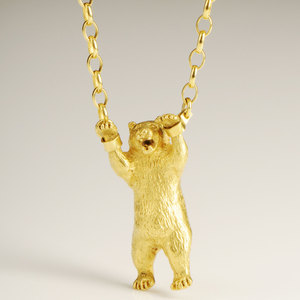 TRAP: Anyone opening a tiny latch on one of the links of this chain will instantly be transmogrified into a tiny golden figure of themselves, with the links they openend as manacles. If a creature-charm was already "in" that link, the previous creature will be freed and returned to normal, and the opener will be trapped as above. If the necklace is thrown as the latch is opened, roll 1d8 below:
1. The thrower of the necklace is imprisoned
2-4. The necklace bounces off the target harmlessly.
5-7. The target is imprisoned.
8. The thrower and target are both turned into tiny golden versions of themselves, but not imprisoned.