"There was little about the creature that could still be called human. He made some animal noise between blood-slicked teeth, and was a mass of tattoos, scars, horns, and weird trinkets made of forest detritus. The tattoos and scars were ancient-looking glyphs, but totally unintelligible. I turned to my companion.
'Ketheree, why have we come here? What could you possibly want with this...man?'
She could not take her eyes off him. 'To learn.'
That was when it first dawned on me, as I looked between them; this is her future, to become such a...thing. This is her truth, the path she has chosen. A chill went through me."
-from the memoirs of Matas Ceril, adventurer 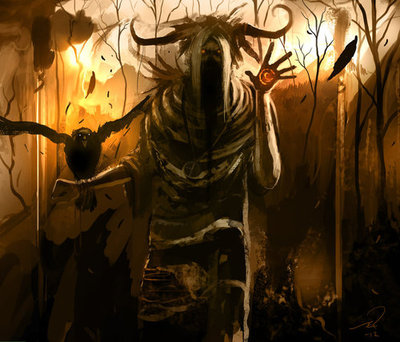 The Coven of the Heart's Blood (Hart's Blood in some areas) were once scattered from one side of the land to the other. Local covens, more or less secret depending on local norms, were found in and near every settlement. In the last few thousand years, their number has faded, until now their traditions are passed down in secret, along family lines. Every few generations, one of them will set off to adventure. In old age, they usually set up a shack in the woods to focus study on bizzarre, complicated rituals.

Practitioners of this magic are called Blood Witches or Blood Druids depending on the region. The title has nothing to do with the practitioner's gender.

Attack and Spell Progression: As a Wizard; Intelligence bonus is added to spells known at first level.
Saves: As a Cleric.

Weapons: They do not use two-handed weapons, as they keep a hand free to cast. They tend to use smaller weapons like daggers, short swords, sickles, hatchets, and slings.

Level Advancement: As a Fighter

Armor: they only wear armors made from entirely natural materials, and tend to keep a lot of skin showing (at least arms) so they can cast spells easily.

Spells: They cast spells from their scars. The scar must have been imbued with fresh blood in the last 24 hours. The scar is traced with a fingertip or a brief chant is said related to the effect, then the spell goes off.

-Upon waking from a rest of 6 hours or more, a Blood Druid may choose to dissipate the magic from any current scars, energize different ones, or embed new spells on their skin.

-When learning a new spell, they carve a ritual glyph or ideogram into their own skin.

-When choosing spells for the day, they imbue a scar with blood from a recently felled foe and a bit of their own. This causes the druid 1HP damage per spell "memorized". This HP is healed when the Blood Druid sleeps 6 hours or more. A PC may not reduce their own HP below 2 in this manner.  If this HP is healed magically before they sleep again, the spell is lost with no effect and the scar is gone. (The PC may reuse that spell "slot" by carving a new scar, the same spell or a different one.)

-The number of spells that may be upon the Druid and ready to cast at one time is indicated by the Wizard spell progression chart by level; this is modified by INT bonus as the DM sees fit.

-Blood Druids are able to select from the Magic User, Cleric, or Druid (if present in your system) spell lists. Two spells are selected at first level, either randomly or by the player or DM. After first level, new spells can only be learned from other Blood Druids through mutually performed rituals, by finding another Blood Druid's scar notebook, or by studying any unused spells on the corpse of a dead one. Traditional Magic User spell books are of no use in this regard.

-Additionally, the Blood Druid may invent a new glyph that copies the effect of a magical item or a spell from a scroll. This requires (15 days of study - the level of the Druid + the level of the effect) and the destruction of the item or expending of that spell from the scroll. The spell is cast from then on at the Druid's level, regardless of the level it had from the original item. If equivalent to an existing spell (and not some unique effect of an item), the Druid must be of sufficient level to learn the spell.

Nature Lore: Blood Druid magic is the harnessing of life essence and natural forces. Their studies and rituals of endurance typically take place in rural areas, far from civilization. This familiarity with nature gives them a chance to know useful things about creatures and their environment.
15% + (10% x INT bonus) + (10% per level gained) is the chance they will notice and be able to get details about creatures in the area, by studying tracks, offal, and detritus. They may also find out details of the local environment ("There's a natural gas flume ahead that belches fire").
The player should ask the DM specific questions, as close to "yes or no" as possible. A new roll is made for each question, and the player may ask as many questions as the character's level. If the roll fails, the character did not have enough information to find that answer (IE no false positives, they just "Can't tell".)


Stick Charms: At third level, the Druid gains the ability to make the following charm:
By imbuing a charm made of bound twigs with a drop of the Druid's own blood, the Druid can extend her own senses to it. Thus, the Druid can see and hear as if she was where the charm is. The Druid can make one charm per month. This process drains 1HP from the Druid per day they want the charm to have this effect. This is restored when the charm is destroyed or the time is up. The charm may be "recharged" if the DM allows it.
The Druid may make this charm in the shape of any small natural forest animal. On a chance of 1% per level, the charm is permanent and animates as if it were that creature. The charm has the effects above permanently, without further blood from the Druid, and is bonded as a familiar.

-At sixth level, the druid can make a different type of charm:
By imbuing a charm with the blood of another (as well as their own), the druid can see and hear through that creature's senses for 5 minutes per day, or cause the creature harm. If the charm is struck, the creature will suffer the damage. The charm is destroyed after one blow. Starting at 12th level, the Druid may Charm or Dominate that creature, as the spells, as long as the Druid possesses the charm. The Druid may have only one of this type of charm at a time.


Tattoos/Horns: At seventh level and every odd level thereafter, the Druid may make one permanent tattoo  OR horn headdress that captures a spell effect and can release it twice per day. This tattoo or headdress requires a special ink made of rare herbs, and the tattoo size is relative to the level of the spell. The ink and materials cost 100 GP per level of the spell. As the Blood Druid's body has become attuned to their particular type of magic, this cost is 70GP/level if the tattoo or headdress is on the Druid's own body. The headdress will become part of the head of the first person to wear it, and may not be taken off unless all magic is removed from it. (IE, you now have horns, and can't get rid of them unless destroyed as a magic item).


"I don't know how my first impression of him could have been so wrong. Hrvatski is a genial fellow, sharing his food and drink with us. A raven made of sticks brings me tea. He has tended to me well, as I have grown quite ill here in the forest. Hrvatski and Ketheree are drawing blood from me frequently to study the illness and hopefully find a cure. I am content to lie here, writing and studying my memoirs, confident that their odd rituals in the woods around the tent are purely on my behalf."

-from the memoirs of Matas Ceril, adventurer, shortly before his disappearance

I plan to use these as NPC's mainly. I can see all sorts of reasons adventurers might seek them out, or run into trouble they are causing.
Posted by Josietron at 9:55 AM