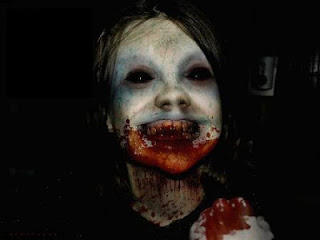 
Cthon was a half-elven general thousands of years ago who preached elven superiority and led crusades against other races. He is the most significant historical figure in the culture of East Trepan.


Children of Cthon were once human children. The elves of East Trepan kidnap human children to use as manual labor. They keep them drugged and in trance states. Those that show a special aptitude for magic and/or cruelty are given to the elven Blood Witches to become something else.

After a ritual during which most of the child's blood is drained and replaced with a special alchemical sludge, the child sleeps for 2 weeks and awakes a Child of Cthon. Part of the sludge is the blood of an elven witch (or witches), who the Child is then forever bonded to and receives commands from.

Their eyes and hair are solid black or white; their skin is white, rubbery, and constantly secreting a clear goo that is unpleasant to the touch. They carry long, curved daggers that are often poisoned. They are known to sneak up on prey, then giggle in a whisper to unnerve them.

Child of Cthon
No. of appearing: 1d6 per Elven Witch present
HD: 2
AC: 5 or 15
Movement: as human child
No. of Attacks: 1 + Special
Damage: 1d4 (bite) or 1d4+2 (dagger); poison causes Sleep or a random effect upon a hit and failed save
Special Abilities: They are completely silent and can hide in shadows as Thieves
Scream: Once per combat they can let loose a Scream, which will cause Fear as the spell and cause anyone failing their save to flee from the Child as fast as possible. The Scream also can communicate one sentence of information to the Child's bonded Witch. Elves and Children of Cthon are immune.
There is a 30% chance the PCs encountered the Child in the past when it was human. 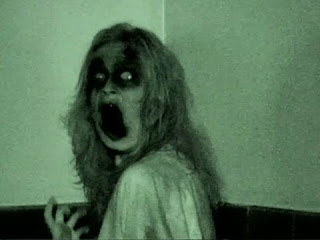 From the film, "Grave Encounters"

If slain by magic, there is a 50% chance their heart will animate and burst forst as an Eye of Cthon. These look like a bundled mass of muscle and tissue with a large elven eye in the middle and 1d6+2 tentacles radiating out from its sides. Eyes of Cthon will not attack elves.

Eye of Cthon
No. of appearing: see above
HD: 1
AC: 4 or 16 (small, fast)
Movement: as a human running
No. of Attacks: 2 or Special
Damage: 1d4/1d4 (tentacles)
Special Abilities: If they land two successful hits on a creature with tentacles in the same round, they are latched to that creature with barbs and auto-hit each round until destroyed. The tentacles will cause damage until the creature or Eye is killed, even if severed.
Eye: Every three rounds, an Eye of Cthon may emit a Ray of Confusion that acts like the Confusion spell to any non-elf that can see it within 15 feet. Children of Cthon are immune to this.

I have a picture in my head of an Eye of Cthon, but can't find anything good online. I may add one later.

*The image at the top shows up on film blogs that talk about vampires from a couple of years ago, but I couldn't find a source or credit.
Posted by Josietron at 12:31 PM