This sword was forged in ancient times, when the human Wizard-King Alons decided that magic in the land was preventing human society from reaching its potential. Through a violent crusade, then arcane pacts, he sealed magic off from the world, including himself. Now, many thousands of years later, magic has returned, but echoes of his fanatical following remain. 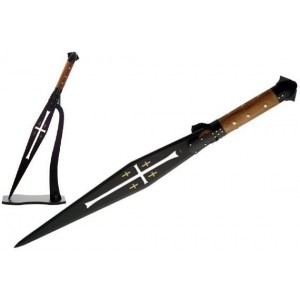 The Inquisitor's Blade - This appears as any sword the least magical person present can wield. If the least magical person present cannot wield a sword, they will intuit that they can use this one with no penalties.
+1 attack and damage, +3 vs magic-users and magical creatures.
The wielder of the sword may not memorize or cast any spell except Dispel Magic, even with a scroll or item. Attempts to do so fizzle dramatically.
The wielder can sense magic as per the Detect Magic spell - magic use, effects, and items are like a burning itch in the wielder's mind.
The wielder has a +3 to saving throws vs magic.
Has 4 charges per day. Charges may be used to:
-Dispel Magic as the spell cast by wielder's level +number of charges they pump into it
-add +1 to hit and damage until the next hit of the sword (IE every attack will be at +1 until the sword connects)
-Detect the location, identity, and strength of all magical creatures and items in a 1 mile radius for 5 minutes.
-Determine the whereabouts of any creature who has been wounded by the Blade and see them and a 5 foot radius around them
The Mind Splinter must be used to destroy a magical creature, magic user, or item at least once a month, or it will refill it's charges every day by draining that many HP from the wielder. If this happens or the wielder of the Blade causes damage to themselves on purpose or through a critical fumble (IE the blade tastes their blood), during their next sleeping hours they will be possessed by an anti-magic Inquisitor for 8 hours. This Inquisitor has the abilities of a 5th level Paladin, and will passionately pursue and destroy any magic users, items, or creatures it is aware of. As it inhabits the wielder's body, damage done to it is suffered by the wielder. The Inquisitor knows the world as it was thousands of years ago.

My next blog post is the weird grotto this thing lies in, where the blade may be given up by returning it to it's stone slick with blood. Years and years of magical blood drippings and the ghosts of the slain haunt the place.
Posted by Josietron at 2:38 PM