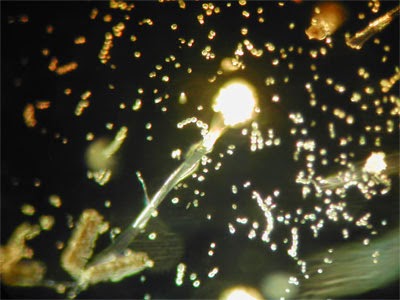 While reputable substance-peddlers take meticulous care to stamp out this pest and prevent contamination, those who get their mind-alterers from nature or shady dealers occasionally fall victim to Narcosic Sentispore contamination. Even a few of these spores mixed with other drugs are enough to cause the following effects.


"Man you gotta watch out. My pal Zed smoked some shady-looking Purple Pipe Weed, and he was never the same again."


Save VS Poison (or make a CON roll, if easier for your system) at a 3 penalty.
If the save fails, each time thereafter the character has a full rest (including between sessions if applicable), one of their Ability Scores is rerolled and the new result is permanent. When all 6 have been rerolled, the character may noticeably change in personality and alignment.
This is because if the spore load is weak, it will replace the brain rather exactly. If the spore load is strong, it will carry the personality of a previous host.
Either way, the character's brains and some systematic soft tissue have been replaced by intelligent fungus. 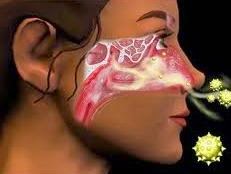 Creatures that have magical or super-senses will consider the character from thereon a plant, for good or ill. Whether this includes unintelligent undead is up to the DM.
Something may seem off and different to family, friends, and lovers. Scrying spells seeking the character specifically will no longer be able to find the person unless the caster has encountered them after the change. As far as the universe is concerned, they are dead, and the fungus in their body now is a different entity - which is correct, in most cases.


Some other dis- /ad- vantages of a Narcosic Sentispore infestation:
•Magical healing heals 1 HP less, but non-magical healing 1 HP more.
•Any limbs rendered useless or severed will grow back as the HP is healed by rest or magic. This will be obviously fungal in appearance.
•If the character is dead, a significant portion of their ashes when breathed by another person will cause that person to become infested with them, and eventually become the original character. If a full pipe-load, or two pipe-loads when mixed with another drug, the smoker will pass out as the fungus violently replaces their brain and tissue, and awake as the old character in 2d4 turns (or hours if that's easier.) If this happens, the new body will retain it's appearance, but have the personality and skills of the old spore host (character). If more than one breath the smoke, each after the first will have a new personality; the original host's personality is only replicated once.
•They cannot use undead or purely magical creatures as hosts.
•Narcosic Sentispore intelligences are inherently genderless. They tend toward neutrality, although some are rather chaotic as the spores poorly integrate with a body. 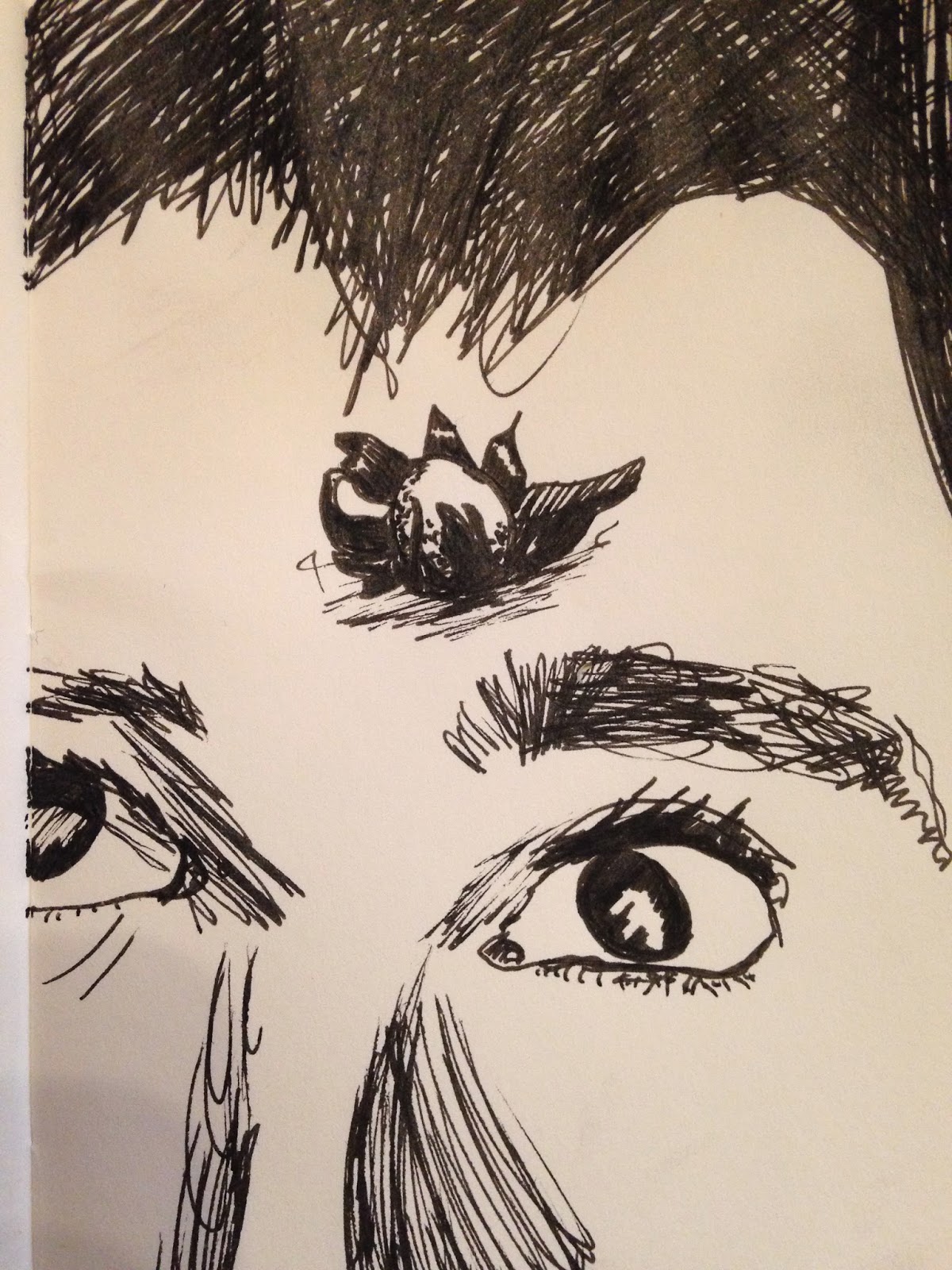 Upon habitual use or long-term infestation, a distinctive fungal bloom is visible upon the forehead.

"People fear that stuff - I knew a dealer who dumped 10k gold worth of Laba Wasp paste because he thought it had a few spores. But man, the people on the underground know - if you really wanna get out of your head, there's nothing like it. Just keep a Cleric around."

What the above neglects to mention is the high. While the fungus is changing the body and brain, the imbiber is euphoric and, understandably, feels as if a new person. Narcosic Sentispores can be used without a complete change if arrested by Magic. Slow Poison will allow one full rest without an ability score being rerolled. Cure Disease, Neutralize Poison, and Heal can cease the effects immediately, although any Ability Scores already re-rolled do not revert to their old values. If CHA, INT and WIS have all already been rerolled, the character will immediately die, however, as the original brain has already been replaced by fungus which the spell has removed.

MORE NARCOSA BUT ON A DIFFERENT SUBJECT
Maps Maps Mapping
I think the illustrious Byron Gysin and Bill Burroughs had the best ideas for making Narcosa maps. Burroughs [my edit text in brackets]:


"The method is simple. Here is one way to do it. Take a page. Like this page. Now cut down the middle. You have four sections: 1 2 3 4 . . . one two three four. Now rearrange the sections placing section four with section one and section two with section three. And you have a new page. Sometimes it says much the same thing. Sometimes something quite different-cutting up [paintings of hell] is an interesting excercise-in any case you will find that it says something and something quite definite."

While Burroughs is a tad conservative, the method is true. I'd probably cut the page into thirds or fourths in both directions and scramble them. The key is not to explain away or rationalize anything for the players. The room is that weird shape. The hallway juts off in that improbably direction and ends, yes. Cut up several dungeons into equal (or unequal!) bits and scramble them together - carved stone hallway leading to wooden wine cellar leading to insulated futuristic hallway leading to solid-vapour cloud palace.
An important part of this is to also cut up evocative imagery, reassemble, and map onto the dungeon rooms in the same part of the other page with the practical map on it.

Bah, I don't know if I can explain it - here are some how to pictures and an end result.
ADVENTURE TIME and all related characters and elements are trademarks of and © Cartoon Network 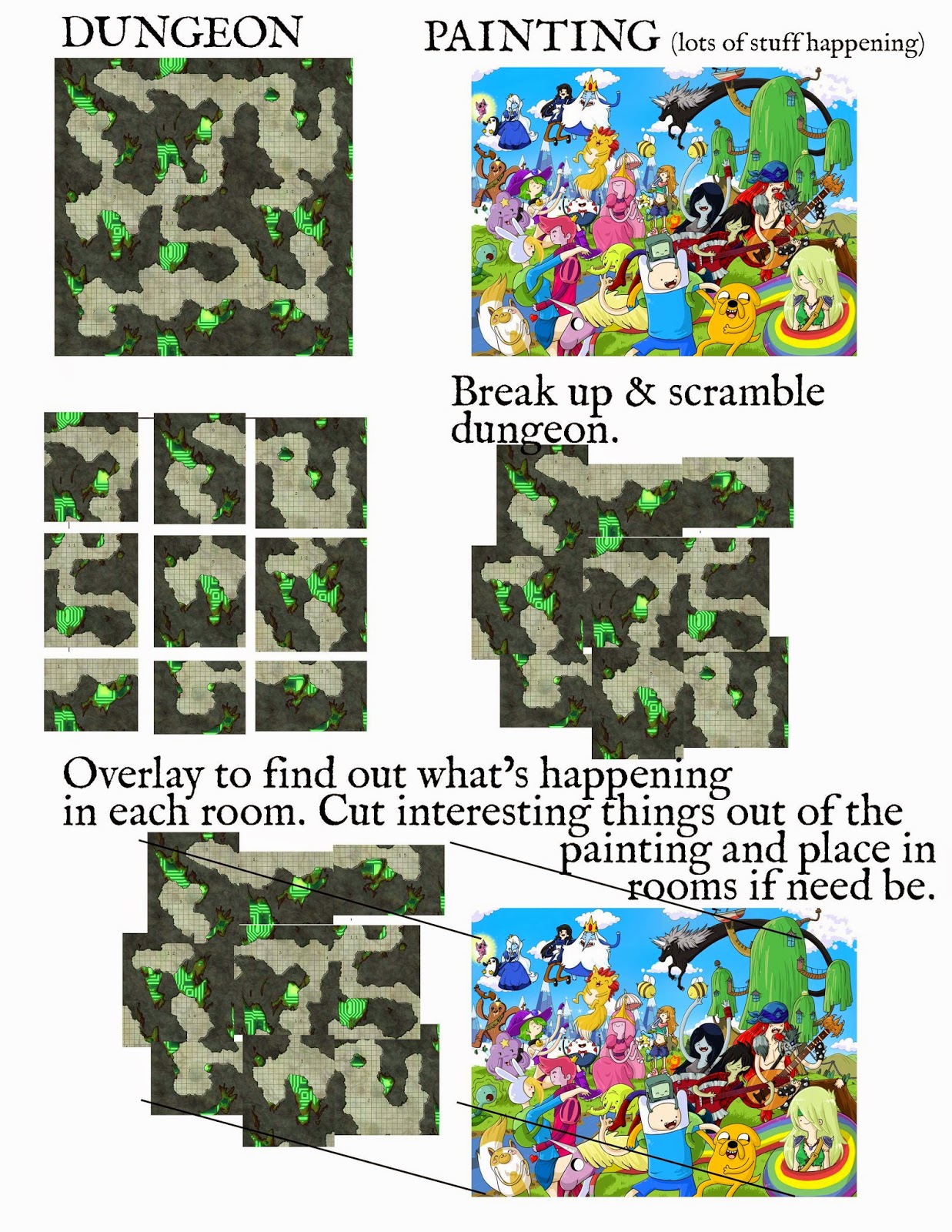 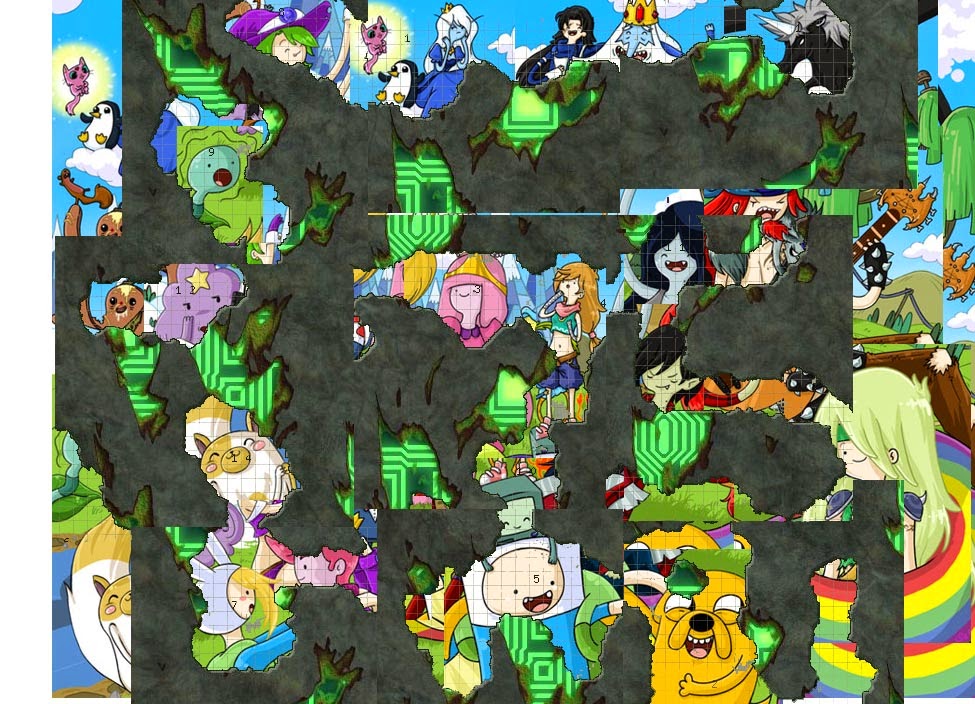 Burroughs here gives up some evocative room descriptions to use while the PCs are off their gourd:


"Visit of memories. Only your dance and your voice house. On the suburban air improbable desertions . . . all harmonic pine for strife.
"The great skies are open. Candor of vapor and tent spitting blood laugh and drunken penance.
"Promenade of wine perfume opens slow bottle.
"The great skies are open. Supreme bugle burning flesh children to mist."
"Cut-ups are for everyone. Anybody can make cut-ups. It is experimental in the sense of being something to do. Right here write now."


OR you could just have a painting up on your screen and when you need something interesting, find something in the painting. I just feel Narcosa should be pretty stream-of-consciousness, depending on what drugs the PCs are doing. 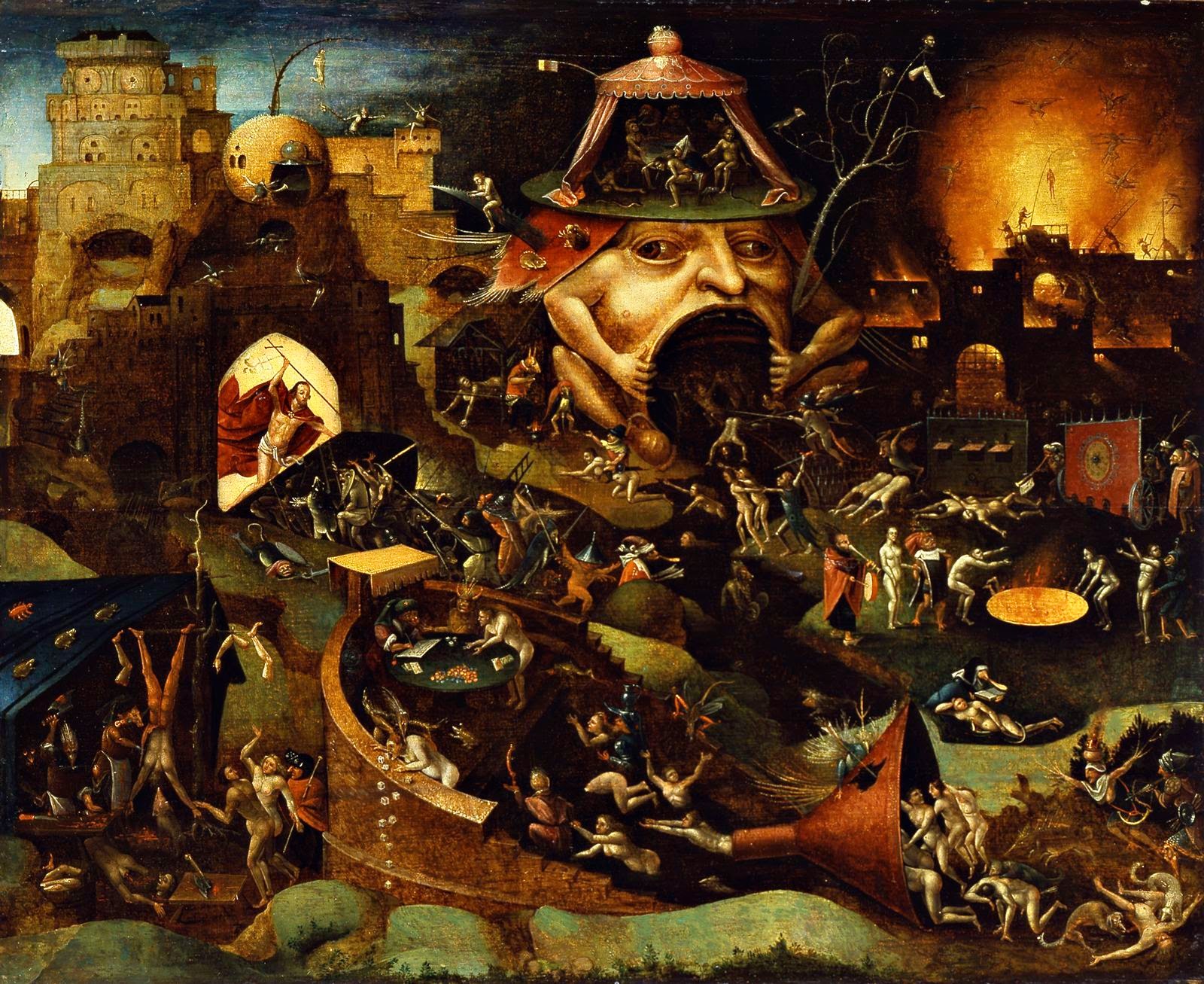 Burroughs quotes from here.
Posted by Josietron at 6:47 PM

Email ThisBlogThis!Share to TwitterShare to FacebookShare to Pinterest
Labels: narcosa