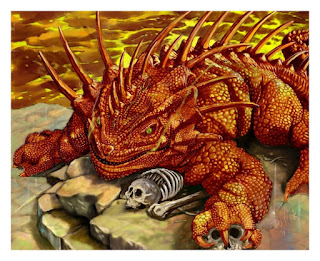 Revised for clarity and such from this post. See that post for more lifestyle details and motivations.
PC RaceClass 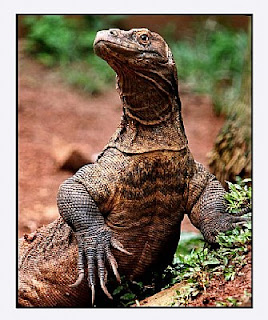 Being giant lizards, they have no articulated digits and must support themselves on at least three limbs at all times. A Fire Lizard PC cannot pick anything up except in its toothy, smoky maw. They cannot use weapons#, and can only use armor specifically made for them*. They are restricted to magical bracelets, rings, crowns, and anything that can be secured on their horny protrusions to the DM's satisfaction.
Fire Lizard PCs may carry 1 humanoid on their back for every point of STR over 11.
A Fire Lizard PC's attacks progress as indicated:
+1 to hit per level gained.
Level - Attack
1 - Claw 1d6, Bite 1d4, one attack per round but reroll misses once; second hit may use different attack
3 - two claw attacks per round; can breathe smoke that obscures vision instead of one attack; all creatures in 20' -2 to hit (except Fire Lizards) and hiding/sneaking is doubled in radius; lasts 1 round or can be maintained as an attack**
5 - can breathe fire for 2d8 damage instead of one attack-this counts as a magical weapon; claw damage increases to d8
7 - total of 3 attacks per round (claw/claw/fire)

Fire Lizards can carry a great deal of equipment with no effect on their movement.
Successful adventuring Fire Lizards often get their claws enchanted, and have silver claw covers made.
Fire Attacks are almost useless against them: At levels 1-5, they receive a bonus to saves vs fire at double their level; after level 5 they are immune to nonmagical fire attacks, and suffer half damage from magical fire attacks if they fail their save (no damage if saved).

**Lenses can be made from the tears of a Fire Lizard; when worn by another creature, this creature can see as normal in that individual Lizard's smoke breath. They must be made by a master craftsman.
The Blood Knows^: a Fire Lizard can consult the memories of it's parent to try to remember details of any creature, civilization, historical fact, etc. This knowledge fades over time.
85% chance at first level, -10% at even levels. See examples in the comments here. If in doubt, use Zak's Ranger Legend-Lore-ish ability at the bottom of his Random Ranger post. 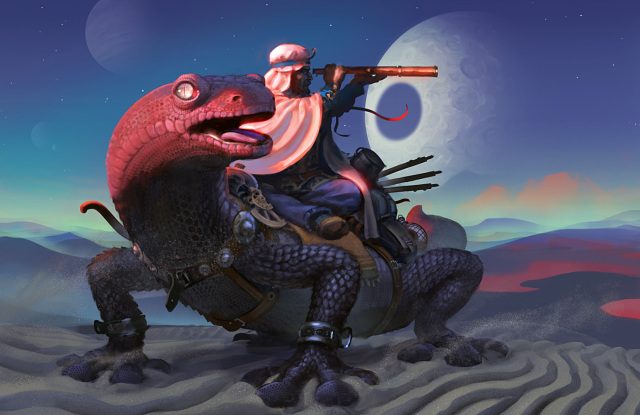 "At least he doesn't wear armor." Maybe they look like this? Art from here.

When a Fire Lizard reaches 50 years of age or enough XP for a level 11 Fighter, they undergo a great physical change and begin eating everything in sight. Often, before this happens, the Lizard will seek an isolated cave and hoard plenty of food or set traps to lead creatures to it. Within 3 weeks, the Lizard will reproduce asexually, laying eggs.
The adult Fire Lizard passes its knowledge to its offspring through some unknown mechanism; after laying eggs, it is of animal intelligence^ and becomes in all respects like the Fire Lizard entry in the Monster Manual. A PC Fire Lizard must be handed over to the DM at this point as an NPC Monster; however, it will hesitate to attack former companions, effectively giving them a free surprise round despite the circumstances of the encounter.

#Fire Lizards have been known to scoop up weapons in their mouths and toss them in an opponents' direction from time to time.
*if custom armor is made for them, the AC is the armor bonus subtracted from 5 or added to 15

^Thanks to Erik Jensen and David Rollins for ideas in general. David came up with the idea for The Blood Knows ability, and they both had some nice riffs on it.

Posted by Josietron at 6:26 AM