The Black Veil (Cult of Kalak-Nur)

Many powerful artifacts of magic and technology have accumulated on Kalak-Nur. Those objects which give one power over fellow creatures do not always help one survive the land, or the ravages of time. The Black Veil are a group, somewhere between a philosophy and a cult, that seek out, protect, and learn the use of such objects. Anyone seeking to use an artifact "Under the Black Veil" can count on having their worthiness and determination tested. 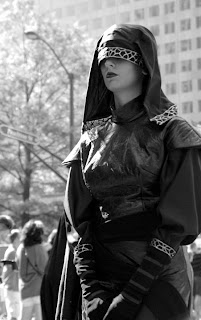 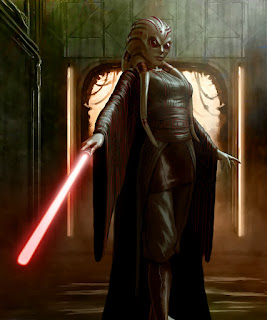 
To try to avoid corruption and use of the objects by their own ranks, the Black Veil do not use magic as it is commonly understood. Instead, through years of harsh training and asceticism, they develop powers of the mind and flesh. They are the only known users of Psionics native to Kalak-Nur, although those who have gained Psionic powers via other means have briefly visited from other worlds. Many have tried to develop these powers on their own to no avail. Without the training and guidance found in the Black Veil's citadels, their Book of Practices, and starting at a very young age, one simply cannot reach the extreme states of mind and body required. 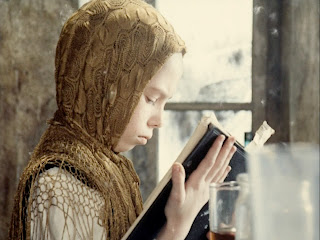 "If I have to spend any more time in this dusty tower reading these stupid books, I'm going to...go out into that barren wasteland...and probably starve to death." (Image from the film Stalker)

The Black Veil are known for their use of laser swords. Indeed, they are the only group known to possess them. In a few solitary cases, a creature has slain a Sister of the Black Veil and taken her laser sword, but this is exceedingly rare and usually swiftly rectified. The laser sword cuts through metal and bone as if they were butter, and can be controlled by powerful psions to fight remotely when needed. The Veil will pay a hefty price for the return of errant laser swords, proof of a lost Sister's fate, and proof a menace to them has been killed. 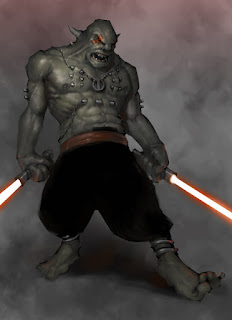 A foul brute who has managed to kill two Sisters and take their laser swords.
(Image)

Some cynics say the only reason anyone respects the Black Veil is because they were the first to stumble upon a cache of laser swords. To most Kalak-Nur natives, however, the group are considered holy and respected in their own right, keeping powerful objects out of the hands of would-be tyrants. To attack a Sister is to betray the masses. Anyone attacking a Sister will receive a psionic mark upon the forehead visible to all, marking them for doom. The ability to mark an attacker is so ingrained that even Sisters suffering sneak attacks have a chance to deliver a mark.

There are known to be two factions within the Black Veil - the Orthodoxy and the Symbolists. The Orthodoxy wear black veils, full robes, and tend to be seen in groups. The Symbolists dress and behave however they want, considering "The Black Veil" to be the metaphorical protective or obscuring covering the group itself provides to items of power. Symbolists tend to be encountered alone, making their way as adventurers, only revealed for who they are when they use their mind powers or find an item they feel needs the Veil's protection. 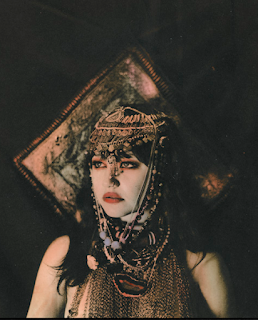 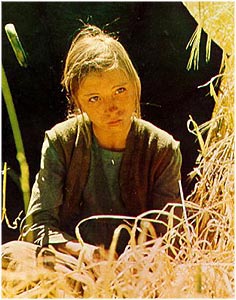 Above: members of the Symbolist faction, loathe to use their laser swords unless absolutely necessary.(R Image from the film Days of Heaven)


It is known that the Veil are handmaidens for a Demigoddess of Knowledge and Magic, Prometha, who has clerics that serve the Veil but are not of it.

In the modern day, the exact whereabouts of the Black Veil's strongholds and outposts are kept secret, and their current projects obscure. The people trust them, however, and their overall goals seem the same as always.