By request, a description of the two major Elven cultures of +Kalak Nur . They are mostly far from any of the areas PCs have explored so far. If someone wants to play a PC of the following Elf varieties or a member of the Black Veil (yesterday's blog post), let me know and I'll figure it out. 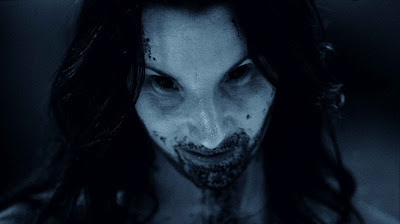 Height: adults range from 6 feet to 8 feet tall
Build: noted for being physically imposing; some theorize they unconsciously secrete a musk signaling them as predators.
Teeth: sharp and pointed in the front; thought to be natural as also present in half-elves not raised in their culture
Skin: palest white, with occasional tinges of blue or green. Tattoos to mark life events.
Eyes: solid black with no distinguishable irises or pupils
Hair: roughly half of them have pitch black hair, half pale blonde (but not white). However, they frequently dye it other colors with plant dyes to mark social station, conquests, battles survived, and other life events.
Dress: rough tunics and armor made of hides, with no qualms about using the skin of other humanoids or intelligent creatures. 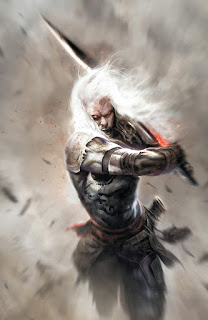 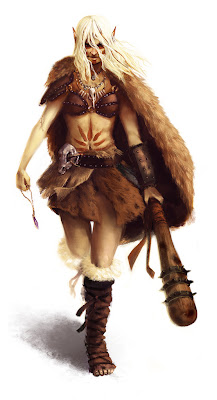 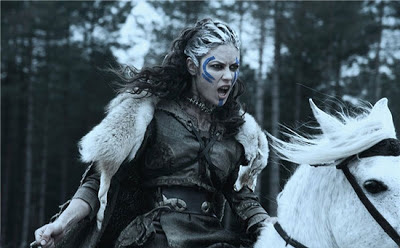 (Images: top from "30 Days of Night", middle cover of an Elric comic and "Barbarian Barbie" by Kimsokol on DeviantArt, bottom is from "Centurion")

History and Culture: In their original land, the Elves of East Trepan were conquerors who ruled a vast empire from sea to sea. Humans built up a rival empire, culminating in a powerful human king making a pact with higher powers that banished magic and Elves from their world. The Elves suffered much adjusting to their new world, and now they are mostly allied savage tribes who seek to undermine human cultures through duplicity and raids.
Captives of other races who are not eaten are taken to their witches, who drain the person they were and replace it with something...other. Children are turned into Children of Cthon. 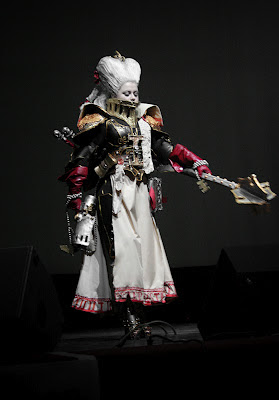 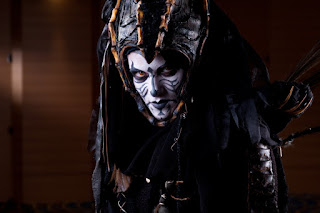 
The Elves of East Trepan on Kalak-Nur are often hidden in plain sight. Sleeper agents have infiltrated many cities of other races and are working to destabilize them. They hide their ears and wear thick makeup, taking on jobs in trade and government to position themselves most effectively. This life grates on them, and they long for the day they can raid openly and eat the hearts of their enemies.


Location: There are many settled lands of other races between the Known West and East Trepan. The Elves there, however, have found tunnel systems between East and West that others do not know of.


Elves of the Southern Reach

Physical description
Height: adults range from 4 to 5.5 feet tall
Build: slender and elegant, they move with grace from birth. Some adults train themselves to move more awkwardly and formally as a sign of "maturity"
Other features: pointed ears, and otherwise consistent with "fey elves" of other settings
Dress: layered formal wear consistent with the Antebellum South, US Confederacy, and/or Victoriana 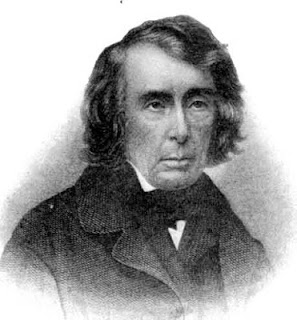 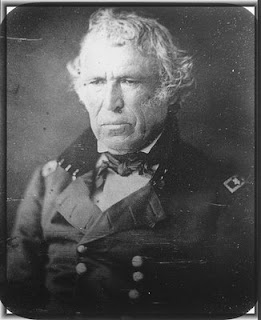 Illustration by Zii on DeviantArt
(photos from the past, yeah)


History and Culture: How the Elves of the Southern Reach ended up on Kalak-Nur is lost to history. Some theorize the ruins of ships full of gears and pipes near their lands were the method, but they do not claim so. They have been here for generations, and have built up their land and culture. While their presence makes the Eastern Kingdoms nervous, there are political truces and trade established. In secret, they work with the Elves of East Trepan to undermine stability and eventually rule once again.
Their culture is one of layer upon layer of formal interactions, social obligations, and superficial pleasantries. Their social hierarchies are rigidly enforced, although those of elven blood may improve their station. Rarely, a non-elf may rise, but it is a distinct anomaly. Non-elves are mostly slaves and indentured servants on their vast plantations.

Magic is rarely overtly practiced, but suffuses their being and colors all interactions with other races and kingdoms. Agreements with the Elves of the Southern Reach and gifts from them are to be feared, as they are enforced by ancient pacts and magical energy. These elves often trick non-elves into making agreements that end up with them as magically dominated Elven slaves. "But wait -" "I didn't mean -" Pleading is of no avail; their magic is strong and brought on by one's own words.
If one receives a gift from them, one must repay it with like value within 24 hours or be under the Elf's sway.

(The Elves of East Trepan are similar to Zak S's White Elves of Nornrik in Vornheim, but I thought I thought of them before I read it. Not sure if I unconsciously nicked it from him or we were just inspired by similar sources. Maybe that's their origin planet? +Kalak Nur  is a world of the marooned.
The Elves of the Southern Reach were directly inspired by +Ian Johnson 's character "The Colonel". It should be noted The Colonel is not a +Kalak Nur native to my knowledge. Maybe they have the same original planet and are offshoots of each other?)
Posted by Josietron at 8:35 AM