While I love the flavor of Reynaldo's Magitek Engineer, when I made one I realized the peanut butter/chocolate mix was not quite the one I wanted. His class is Thief-based and shines with a high INT and low everything else. I found myself wanting something similar but more based on the Magic-User, and so, here ya go:
NOTE: I am basing this off the Lamentations of the Flame Princess Weird Fantasy Role Playing Game for base rules, as that is simple and has a free PDF version. It should adapt to any TSR-era D&D or clone, re-imagining, etc. 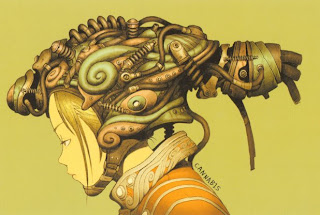 Both of these images are by Tatsuyuki Tanaka 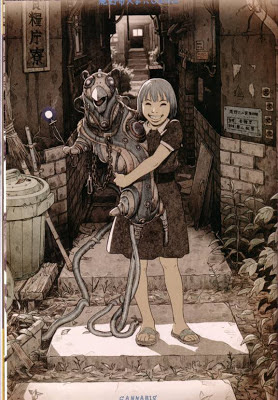 Armor: Leather or self-made†. Must wear badass boots at all times.
Equipment: Tools, cost the same as Thieve's Tools. Cannot refresh gadgets without them.
Abilities: Gadget Tricks* - The Gadgeteer can make gadgets that produce the same effect as a Wizard or Cleric spell. To find out what type of effects his or her gadgets can do, take the Gadgeteer's level and consider that the number of "points" available.
§ -1 point per level of the spell
§ -1 point for every spell beyond the first
§ -1 point for every use per day beyond the first
So, a first level Gadgeteer can make a gadget that produces the effect of one first level spell, once per day. A 4th level Gadgeteer has a lot more options: 1 fourth level spell once per day, one first and one third level spell once per day, two second level spells once per day, one second level spell three times per day, two first and one second once, One third twice, etc.

§ After a rest of 6 hours, the Gadgeteer can disassemble everything and start over with their "points" and do new spells, or just choose to have everything refresh as it was yesterday.

§ Don't make everyone wait while you choose. If you tend to get option paralysis, just choose a bunch of stuff quick and have fun working out its use. You can also plan ahead in between sessions and stick to a few basic choices during play.

§ The player MUST describe how the gadget accomplishes the task; the description does not have to make sense in any way, but must be entertaining/cool/flashy and brief!  No crap like "My gadget casts Confusion," but more like, "I press a couple buttons and my diesel-powered bulldog robot hovers in the air, a shimmering blast of colors coming from its eyes. All who are looking at it must save or be Confused by the crazy lights!" OR "The teapot that follows me around on tank treads puffs out a bunch of pinwheels that spin swirly colors and Confuses everyone within 15 feet!"

§ Instead of Spell Effects, the player can spend a "point" that can later be used for an ability check. This must be declared when gadgets are being built (IE after a rest or whatever) and must be described. ("A spindly arm of metal tubes and wires shoots out of Binky the Teapot and pushes your arm just a little farther.")

§ Points can be spent for an effect to trigger if the Gadgeteer says a specific word, but if this must be declared when points are being spent and not later. Otherwise it is assumed the Gadgeteer must have physical access to gadgets to trigger effects.

Tinker, Languages- Gadgeteers are natural tinkerers, and they tend to need information from technical manuals in odd, dead, and foreign languages.
§ If you are using LotFP, they get one Skill point to spend on Tinker, Sleight of Hand, OR Languages every level.
§ If you are using AD&D, at level one they start out with the same beginning percentages in Open Locks and Find/Remove Traps as Thieves do, and 15% in Read Languages. Every time a level is gained they get 16% to distribute among these as the player sees fit.

†Power Armor- At level 7, they may begin building Power Armor. They may construct Power Armor from scratch, or improve existing armor with odd glowing tubes, plates with lights and gears, etc. For every point of AC protection, 100GP of materials and one day of construction are required. They may build in "Gadget Effects" as per the DM's magic item creation rules. 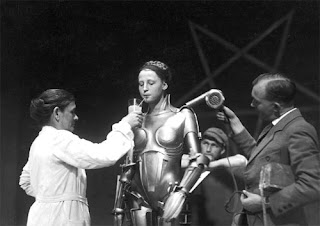 From the making of "Metropolis"

*This sort of "Character level as spell points" system has a different power curve than the standard spell progression, leading to less spells at higher level. It can be really useful for dungeons where you can come back the next day, though.

If you're looking for more visual inspiration, check out Reynaldo's version for a lot of great imagery.
Let me know what you think, if you have feedback or anything is unclear, etc. Next up: the Hacker and Machine Bonded classes. I've been thinking about them a long time, and I'm sure they're horrible. Machine Bonded are basically the goth-fighter version of this.
Posted by Josietron at 12:20 PM