Attack and Defense Forms for Empire of the Flaming Moon

This is an Alpha document that will probably need a lot of editing and tweaks once I get feedback from other people. If I update it significantly, that'll be a separate post. It's an attempt to quantify special sword techniques as seen in Samurai films and, primarily, The Legend of Kamui manga. This mostly covers using special attacks with a weapon in a duel format with others who know their own Forms, but can be used (at risk) in other types of combat or applied to unarmed attacks - or Advancements used to make a Form useful against many foes.
My goal here is to make a system that front loads all the complexity (IE most decisions are made when the thing is learned by a character and not during a fight), makes special and tense duel situations, involves a choice between gambling and investigation of an opponent, and has a lot of room for clever strategy without any heavily exploitable flaws.
If you missed it, here's the link to the current basic character creation document.
Notes:
1. most medium weapons (including swords) in Empire of the Flaming Moon do 1d6 damage. Most people have 1d6 HP per HD (and most common NPCs are 1HD).
2. EotFM has some of the cool aesthetic differences between the genders of feudal Japanese cultures preserved, but I am doing away with the limitations (what there even were; see Kunoichi and Onna-bugeisha). Women can be Samurai, Ninja, and wandering Swordswomen. Sometimes in the text I say Swordsmen or swordsman because it sounds less clunky than the alternatives and I'm trying to get this stuff written. It refers to both sexes. 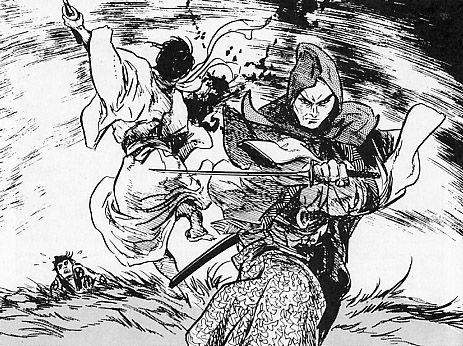 Special Attack and Defense strikes and positions are part of the training of Samurai, students of sword schools, and most Ninja. In Attack Forms, a strike is positioned to inflict maximum damage to a specific part of the opponent's body. If that part of the opponent's body is protected by their weapon or body's position, damage will be lessened or negated. Often the outcome of a battle - and the survival - of combatants is determined by clever choice of Attack Form based on their knowledge of the opponent's Forms. Sometimes a confident swordsman will inform his target that they will duel, then lounge in the same town, waiting for his opponent to let him know they are ready. Sometimes they have even shared meals or drinks, often one sweating and asking desperate questions, the other jovial or full of dread duty.
These special Attack Forms are not often used in mass combat. Setting oneself up to use them effectively and returning to more general fighting stances afterwards takes time. Armor also tends to interfere with the swift movements involved, so they are usually used when wearing day-to-day clothes.
However, when two highly trained fighters meet, it is most likely a fight to the death. Those trained in Attack and Defence Forms most often use them on others so trained.
A Samurai or lone swordperson's reputation is often such that one can find out where they trained and thus gain some idea of the range of Attack Forms they might use. With Ninja it is more difficult, but still possible, to get some knowledge of their personal Form or those taught by their clan. Samurai often know only the forms taught by their training; the same is true of Swordsmen, but they may develop personal styles as they advance. While Ninja Clans train in standard forms, they see these as building blocks to develop personal forms. Thus, a single Ninja who is properly advanced may be the only living person to use their form - and will make sure anyone else that sees it dies.
Sword Schools will seek the death of anyone stealing their Sword Forms through spying or teaching their Forms outside the school. 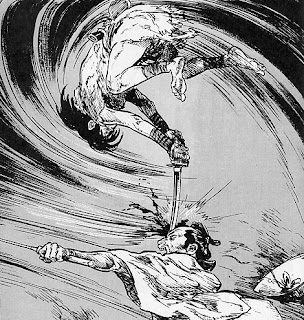 ATTACK FORMS
One round before and after an Attack Form is used, the character may take no action but to move forward at 1/4 speed, jump, or come to a standstill. Attack Forms are used because they are deadly, and often end a battle on the first blow.

Choose at character creation or when the Form is learned:
-where the strike will fall on the opponent's body
-the position of your sword (or other weapon) in relation to your body at the start of the move, and the end (if different) - IE what parts of your body are protected by your sword

then choose one of the following:
-your blow gains 1 speed
or
-a part of your body is protected by position or object (block of wood, bending foot under you, etc); if by position, this may change from the beginning of the move to the end

Attack Forms are static, that is, everything about them is determined when they are learned. To have one that works differently, one must train an entirely new move. The character may have a number of Attack Forms ready at any time equal to their current Practice +1. (Practice is a record of whether you have spent at least 1 hour of the last 48 practicing your moves.) Thus, a character who has not been in a stable enough place to work out in the last 2 days must choose only 1 of their Attack Forms to call upon.

SPEED
The blow with the highest speed lands when the opponent's sword is in Beginning position. If the blows have equal Speed, they resolve normally. A point of Speed one would have on a blow may be sacrificed for the following other effects:
1. acrobatic bullshit - jumping, tumbling, etc as part of the move. If intrinsic to the move, this should be defined when the Attack Form is first learned.
2. recovery - to take the round after normally, instead of the usual recovery round of inactivity
3. blocking - areas of your body blocked by your own sword take no damage instead of half.

SWORD POSITION and ARMOR
Your sword will be in the way of the opponent's to at least one of your body parts. If the opponent's blow would strike this part, the blow inflicts half damage instead of full. If you sacrifice a point of speed (must be stated before blows are struck), areas thus blocked take no damage. ("Clang!" neither blow lands as swords collide).
If one's sword changes position during a blow, define one part of the body that is defended by it at the beginning of the Attack Form and one at the end. If Speed is equal among combatants for this blow, BOTH parts of the body are considered defended.
If a part of the body is armored, that part takes half max damage from a successful Attack Form blow. (usually this means an Attack Form is being used on common soldiers - or the dishonorable. Swordsmen going into battle with each other rely on their skill and not armor).

SEVERING LIMBS
If a limb is struck and totally undefended, a character may attempt a contested STR vs opponent's CON roll to sever it. Of course, whether the Form attempts to strike a limb is determined when the Form is first learned. 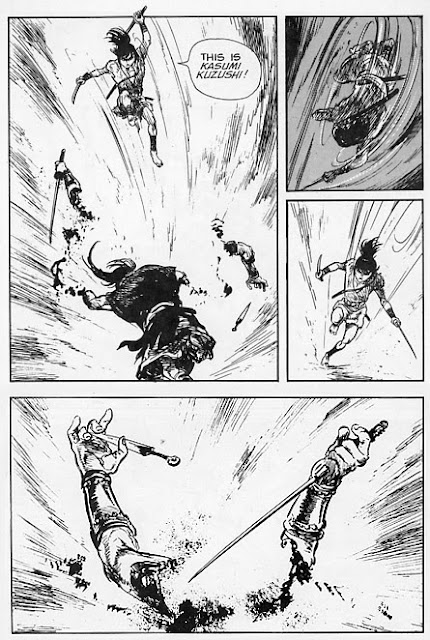 THE USES OF ADVANCEMENT on an already learned ATTACK FORM
1. add 1 Speed
2. add 1 additional part of the body affected; this may only be chosen once; damage is only max and not double for totally undefended parts; severing limbs is possible
3. add one standard attack to another opponent at (level - 5) to hit (throwing something, swinging sword around, kicking, etc. Thus, a level 1 character would have -4 to hit for this standard attack)
4. If an Attack Form already has #3 added, that blow may be turned into the Attack Form (but is now executed the round immediately after the first blow)- IE the Attack Form can be made against two opponents in quick succession. Speed for the second is at -1.
5. reduce a specific penalty associated with the attack by 1
6. If the character knows Kawarimi (see Ninja Tricks under Power/Magic section forthcoming), add one part of the body that Kawarimi is true for during this Attack Form. Torso sections are considered separate parts for this. 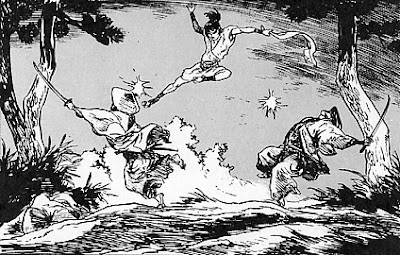 I hope this gives the ability to advance to a place where it makes more sense to use Attack Forms against foes who are not using them, in mass combat, emulating the mythic swordmen who dispatch regular foes with their technique right and left, but only after years of normal fighting, training, and duels with other swordmen. See the attached PDF at the end of the Attack Forms section for a longer example from Legend of Kamui, from which most of the images here are taken.


EXAMPLE OF AN ATTACK FORM USED:
What seems to happen in The Legend of Kamui is, most samurai and swordsmen have an attack form that goes like this:
-the blow will strike the opponent's torso (front - or right to left, diagonally)
-the samurai's sword is raised in front of or above his head at the beginning of the blow, and lowered in front of his torso at the end
-the samurai's head is completely protected at the beginning of the move, his torso at the end


Kamui's personal and secret sword technique, Kasumigiri, seems to go something like this:
-the blow will strike the torso (left or right, whichever is toward him)
-his sword is sheathed or held to the side at the beginning of the move, then held upside-down but horizontally in front of his torso at the end
-none of Kamui's body is especially protected by the move itself, but it happens really fast. Mechanically, it gains Speed: 1. (or he's just fast - IE he added 1 Speed through advancement)


Thus, Kamui's blow lands while the other swordman is still in beginning stance (protecting his head), doing double max damage to the opponent's torso. If Kamui's blow didn't have 1 Speed, it would be deflected by the opponent's sword in this scenario, since the opponent's ending sword position is in front of their torso.

This five-page sequence from Legend of Kamui #19 (as selected and published in the US by Viz in the 90's, and currently out of print) shows a swordsman using Attack Forms against first regular opponents, then another trained swordsman. I've tried to make it possible to get to something like this with sufficient Advancements. Legend of Kamui isn't the only influence on Empire of the Flaming Moon, but it's a big one for sure.
It's also awesome, and with the knowledge that Kamui also covers a lot of class issues and human questions, should light a fire in you to find it and write endless letters to publishers to get the massive amount of Kamui that's never been translated into English to get a high-end translation and printing.
Ahem.
https://dl.dropboxusercontent.com/u/31908580/The%20Legend%20of%20Kamui%20019%20-%20Unknown.pdf

DEFENSE FORMS
Defense Forms are far simpler mechanically. Choose 3 of the body positions on the below chart. If one round is spent doing nothing else, these three parts of the body are immune to harm from Attack Forms (blows are deflected by weapon or dodged). In standard combat, this grants a bonus of 4 to AC. If a character began running or jumping the round before, they may continue at 1/2 speed while using a defense form.