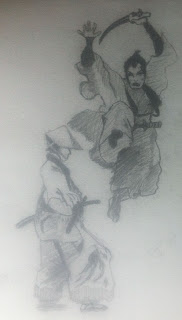 Feeling lately like Empire of the Flaming Moon has been a series of dead ends - maybe the experiments with rules I've been doing would be a game interesting for me to GM but seems more and more there are not that many interested in playing it. And which is fine, it just means I need to stop spending time on it. I wasn't exactly sure how to get the thing I wanted to end up with when I started, and maybe this wasn't it.

Are there people who haven't commented that have been reading the blog posts and are just kinda waiting to speak up til I run a game?

I guess more importantly, are there people who feel invested in playing the rules as written on my blog thus far?

Would the whole thing be better retooled as a setting/skin of DCCRPG or Warhammer FRP?
(I'd take a few months working on behind the scenes GM stuff for it then run it in the Winter).

While I'm working a lot less day job (yay being a contractor) I have a lot more going on socially than I did on the East Coast (IE before last month) and of course I need to schedule and prioritize a bit more than I thought.
I'm not at a dearth of inspiration or feeling for RPGs in general. I've been excited about playing more lately, although real life stuff keeps coming up when the games I most want to play on G+ happen (like last night).

I also have an idea for a CoC/BRPmodern game set in the present day that I'd love to run as a long term G+ campaign on a consistent night. Lovecraft stuff would only be 1/4 or less of the inspiration for what's really going on there - more Silent Hill/Tsutomu Nihei manga/Angel Heart (the movie)/Clive Barker/Cronenberg/David Lynch type of stuff.

I guess beyond a  thing I want to run for the month of October, I'm feeling way more enthusiastic about running non-D&D stuff lately.

New comments are not allowed.