It is difficult for me to determine if the Attack Forms system is hopelessly fiddly or if I communicated it wrong in the earlier post. Since you do not have the glorious pleasure of being in my brain, I'll rewrite it from a different perspective and see if it makes more sense. 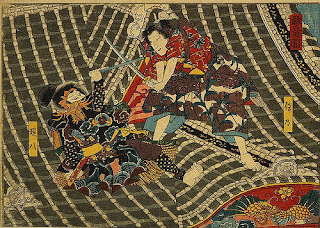 OK, so I rolled really cool on the creation charts, my character has saved a Ronin from bandits, joined a Daimyo's house, done a favor for a Sword School and sworn never to tell their secrets, or otherwise got herself in a situation to learn an Attack Form during some downtime. What now?

The GM will tell me that either the teacher has offered to teach me one of their preexisting forms, and a few hints as to what that is, or that the teacher will help me work on something of my own creation.

If 4 is a "No", then Speed = 1 (until improved by Advancement or affected by decisions below.)

If 4 is "Yes", the GM determines any applicable effects and Speed = 0.

Here are the body parts again. This list is both for decisions about your body, and your opponent's. Torso (Right) or Torso (Left) can be chosen as Torso (whatever side is toward me). 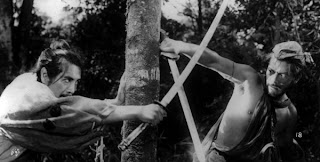 OK. I have tracked down the rogue Ronin Hiretsukan who has been harrying the countryside with all sorts of depredations. Hey, that's my job! We've been circling each other for days and have exchanged harsh words in a rice field while wind blows dramatically.
SHIT JUST GOT REAL, MOTHERFUCKER!
What happens now?
The GM decides what Form Hiretsukan is gonna do, and describes what position his sword is in.
I either researched his moves and now have a clue what Form he's preparing or didn't and don't. Either way, I choose my move and describe my sword position at the start of my Form. Hiretsukan changes his or doesn't and I react to that or don't. Once we stop changing positions and are ready to exchange blows, I tell the GM what Form I've decided on. In game, my PC and Hiretsukan launch toward each other in a rustle of kimonos and swords.

What I chose in the moment:
1. What my PC does in the build-up round, whatever makes sense at the time or sets up any acrobatic parts of the Form.
2. What Form to use, if I have several. I could also choose to use a Defense Form instead, dodge, or whatever else, but I have to decide the round before.
If two PCs were going at it, the players would describe their sword positions then each secretly tell the GM what form they're using. Or Chris H's excellent suggestion of having a note card for each Form with the starting sword position on one side and the Form details on the other.
3. Whether my PC is still or moving slowly away after the strike.

In D&D terms, the strike of an Attack Form auto hits without a To Hit roll, so is blocked/deflects/etc only if the opponent's form blocks it.

My PC Tsubame has chosen has chosen to use her Tears Of A Dove Form, which involves a leap and strike at the head. It starts with arms akimbo, the strike bringing the sword from right to left.
1. Position of Sword at Start: Right Arm
2. Part of Body Hit: Head
3. Position of Sword at End: Left Torso
4. An acrobatic leap is inherent to the form. Speed = 0 unless I improve it with an Advancement. This also means hits to my legs miss since I'm jumping if they don't beat me on Speed.

The GM decided Hiretsukan is using his Knee Chopper Form, where he goes to one knee and swipes at the opponent's. Hiretsukan doesn't know about my Tears Of A Dove Form.
1. Position of Sword at Start: Right Torso
2. Part of Opponent's Body Struck: Left Leg
3. Position of Sword at End: Right Arm
4. Acrobatics: Yes. Hits to Hiretsukan's head miss since he drops to one knee, again unless the opponent's strike has superior Speed. 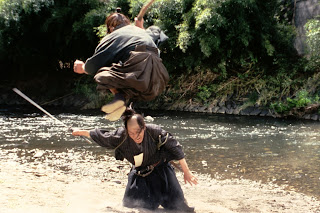 We both missed! I'm sure my party would feel privileged to witness the rare duel between swordspeople that lasts to a second blow, if they weren't busy with Hiretsukan's bandit henchmen. (Hiretsukan ducks under Tsubame's blade, and Tsubame jumps over Hiretsukan's - all happens much faster than a usual swing-and-dodge would because these are well-practiced techniques.)

My PC Tsubame and the foul NPC Hiretsukan both spend a round - me landing and moving away a bit, him getting back on his feet. There's another round as we face each other again, preparing the next strike! I don't know much about Hiretsukan and he's blown one mystery move.

The GM decides that Hiretsukan is counting on his brute strength, and is going to use the Beggar Maker, which is a vicious strike at the Right Arm, attempting to sever it.
1. Sword at Start: Left Arm (he's holding his sword so far diagonally across himself it's not even really blocking his torso)
2. Hit Location: Right Arm
3. End Position: Torso (front)
4. Acrobatics: Nope. Speed = 1.

We exchange blows at the same time! Our Speed is equal. He goes for my Right Arm...but his blow is deflected for half damage by my sword! This also prevents him from attempting to sever it (the body part must be undefended for a sever attempt). My blow lands on his Sword Hand! It is useless! (Hiretsukan suffered 6 points of damage, Tsubame 3; Tsubame's sword was blocking her right arm because the White Dove's Offering Form ends there. Tsubame has more than 3 HP and Hiretsukan is a 2HD NPC so has more than 6.)

I hop away, wary of dirty tricks from the old bandit. After recovering for a round, he throws down a smoke pellet! One of my allies is free and throws a shuriken, but Hiretsukan is gone. He must have trained with Ninja as well as Samurai! Of course, the crazy one in our party decides he can't get away if we set everything on fire, and starts to do that, but that's a different story... 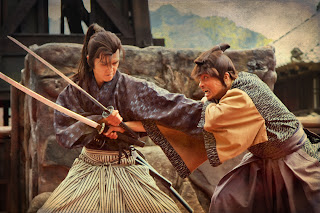 Posted by Josietron at 6:02 AM