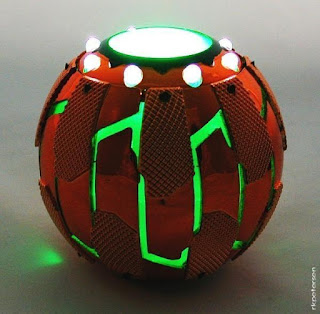 Quantum Containment Sphere
These spheres of intersecting metal plates are usually 10-20 inches in circumference. This item can be activated and thrown in the same round.
One round later, it will identify the three closest creatures and try to absorb them. These creatures get a save vs Magical Device at a 2 penalty and a bonus equal to HD to resist. If the save is failed, the creature disappears. The item can be used again until 3 total creatures are trapped.
The creatures reappear in the same proximity to the sphere some time later. Roll 1d6 when a creature is trapped to find out when it reappears/is freed.
One creature trapped:
1. 3 rounds
2-6. When user presses corresponding button (not more than 1 month, must be freed during a game*)

Two creatures trapped:
1. 3 rounds
2. 30 minutes
3-6. When user presses corresponding button (not more than 1 month, must be freed during a game*)

Once 3 creatures have been trapped and released, the item will need to be taken to a charging station before being used again. 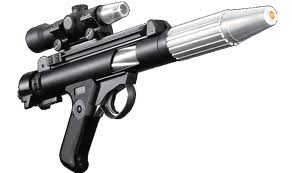 Blaster, cheap
This is the lowliest of the blasters around but still a very rare find on Kalak-Nur. It holds 3 charges (shots) before needing to be taken to a charging station.
Treat to-hit as a missile weapon that ignores the target's armor. Reflexes and natural defenses still come into play, all at the DM's discretion. There are 3 settings:
Yellow - stun target for 1d4+2 rounds
Orange - stun target for 1d4 rounds, do 1d4 points of damage
Red - do 2d4 points of damage, no stun
Stunned creatures get a Save VS Device to throw off the stun immediately if they suffer any damage while stunned.

There are known to be portable chargers for these items, but those are usually in the hands of local warlords or very organized and protective communities.


*Any game, as long as the DM is cool with it. Fuck yeah ConstantCon!

First pic is the Green Goblin's Pumpkin Bomb from one of those Spider Man flicks, the second pic is one model of rebel blaster from Star Wars.
Posted by Josietron at 1:39 PM