This is a weird class that requires a lot of setting buy in and probably some forethought on the DMs part. I'm writing them up for Kalak-nur the forgotten moon, which is full of crashed spaceships and future-ancient tech, so as written they are mostly useful in a world where technology is ubiquitous and mysterious. 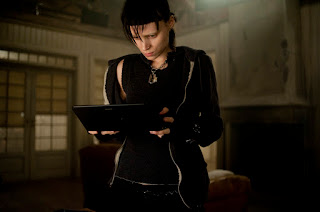 From "The Girl With The Dragon Tattoo" Equipment: Hackers always have some sort of deck, an interface to various systems with a screen, keyboard or other input, and various connections. They can be played without one, of course, but it is harder to use their abilities (-10%). In addition, they usually have lots of cables, adapters, gadgets, and sometimes Thieves' Tools. The player and DM should insure the Hacker is always spending money and time tracking down parts, cables, adapters, a new deck; equipment lust and being frustrated with limitations is kinda their thing. A bonus to the Hacking ability based on lavish amounts spent upgrading the PC's deck makes sense. Abilities: well, Hacking - Hackers are good at figuring out systems. In addition, they have the most ridiculous luck finding ways to interface their deck to some system they want to use, even on another world. This requires a lot of study, which is why they don't learn magic or fight so well.
The basic rules for hacking are:
-Roll under INT, but the roll has a penalty equal to 6-level (IE a 5 penalty at level 1); this is to establish an interface and takes 1 round
-The player should keep track of the type and origins of systems interfaced
-If it is a system the Hacker has never interfaced, it takes 1 round to get their bearings; they may make another INT check to add a bonus of 10% to the next roll for this type of system forever, but it's a penalty if the INT check here fails.
So for systems the Hacker has not encountered before, so far we've got 2 rounds and 1 or 2 INT checks. 1 round and 1 INT check for systems the Hacker is familiar with.
-Then the Hacker rolls to see if they can do the effect they are going for; the chance is 10% plus 10% per level gained (so 10% at level 1, 20% at 2, etc)
-If the Hacker fails by more than 50%, they fail. If by less than 50%, divide the % failed by 10 (round down); this is how many rounds they have to sit there and hack before getting to try again. The second roll only gets a reroll on failure of 40% or less, then 30%, etc. So if your hack fails by 44%, you can sit there and hack for 4 rounds and roll again.

Limitations: The Hacker may only affect machines within 5 feet of themselves per level; IE a first level hacker could affect the door in front of them if they are at the control panel next to it, but not open the door 10 feet down the hall.
If they are hacking for information, the information must be on a computer within the 5ft/level range of Hacker influence. The scope that can be found increases with level:
Level 1 - is a specific name extant in the computer's database; how many doors does the ship have; what is the name of the default account on this computer; what planet are we near.
Level 3 - Where are the Captain's quarters?, what is the ship's manifest?
The type and scale of information will depend greatly on the campaign and situation. Limiting the scope of information gained is the part of this that requires the most thought from the GM. Anything else should balance out OK by using the 5ft/level rule.

Social Hacking- Acts like any Bluff skill; alternatively it's just like the Interface step of Hacking above but with Cha instead of Int (IE roll under at 6-level penalty: 5 at level 1, 4 at level 2, etc)

Thief Skills - LotFP Tinker score is equal to level up to level 6; If using more AD&D, then Hackers have Open Locks and Pick Pockets as a Thief. 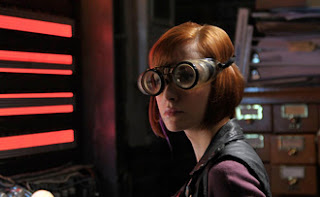 So, let's say your party already knows where the Captain's quarters are, and that there are security cameras in every room. What your party needs the Hacker to do is tap into that feed to see if the Ygduul Parasite from Alpha-2 is in there with him. A low level Hacker has a chance to do this, but would have to get into the next room over and right against the area the camera is in (IE he isn't skilled enough to tap into the ship's security system yet, so has to access the feed directly by pulling wires from behind a wall panel, or something). 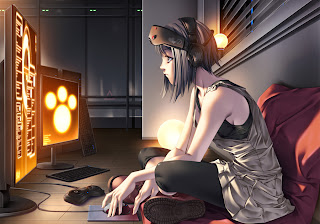 On Tumblr without source or credit

Or let's say your party of scum villains has been caught stealing gems on a Trade Federation ship and is being chased trying to get to their ship to escape. The Hacker says, "Hold them off a minute!" And jacks into a door control panel to rig the whole door mechanism to explode in 5 seconds. The party holds off the pursuers with minor injuries, the Hacker is successful on all her rolls, the party runs through, and when the pursuers run through - BOOM!

I can't tell if this is awesome or a messy hash. What I do know is, a first level Hacker has some tiny chance of restarting the ship's engines if you put her in the Engine Room and give her time. I think they should get a +10% bonus they can spend on any hack for each time they try something crazy like that.
Posted by Josietron at 6:19 PM