Interdimensional Bureau of Standards and Statistics 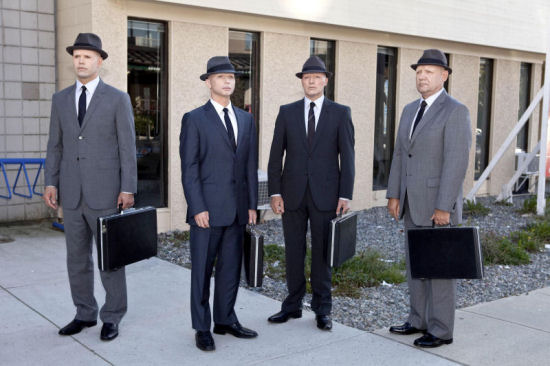 "Then one day they were there, occupying a tower at that nexus between realities, coming and going as if they had always been. Hats, notebooks, briefcases, odd note-taking and measurement devices. One would open a window to some far-off place, shake his head, and pluck a cyberblaster from the grip of an ape-man, replacing it with a tree branch. Mostly, they catch these things as adventurers travel between worlds. Adventurers being the types they are, they usually look down at the changed items and shrug, ready for whatever comes next."

"It is said they have no emotions, no true existence, only their effect. To keep up appearances. To maintain balance. To shore up boundaries. If all realities were allowed to bleed into each other without someone maintaining the borders, the whole thing would become unmanageable. Realities would collapse.
My companions lie bleeding as I hide behind this crevasse, the last standing, waiting for a shot at the dragonne's weak spot with this crossbow. Yes, I miss my blaster, my laser-sword, but I would miss existence more. Besides, this was the whole point - I left home to find a challenge."

This is mainly in support of Zzarchov's blog post, and other various discussions on G+ lately about powerful things from some ConstantCon/Flailsnails games coming into other games where they don't really fit. It's vital to keep the games fun to run for the DMs, and if things get too crazy with genre or power level, some might get sick of it. Go to Zzarchov's blog and suggest your own Flailsnails import restrictions. EDIT: SCRAP has some good ones.

It's no skin off my back if anyone changes or doesn't allow items from my games in theirs. Physics, and meta-physics, probably just works a little different in your world.

I actually feel a lot of historical precedent for this, as the (older) gaming community I was in at a young age ran a lot of one-shots or mini-campaigns by different DMs and was kinda like an in-person, ad-hoc FlailSnails/ConstantCon. Some DMs let you bring in whatever, some were fairly ruthless with magic items and abilities from other games, and we rolled with whatever, 'cause we were there to play.

I do think there is something to be said here about players having a responsibility to keep their character sheet items organized and in one spot on the character sheet if they are going to hop between games a lot. If weird items and abilities were in a separate, easily-browsable list from the rest of the character's stuff, it would be less of a time-suck for a DM to look things over and say "yes" or "no". The DM has enough to worry about, so I do feel players should be doing at least 75% of the work here.

...I also think having agents of the I.B.O.S.S. just in the background, or showing up to take some measurements in the middle of a dungeon, has some milage for creating a nice atmosphere of mystery, conspiracy, or humor if handled right. I imagine them like the Observers from Fringe (I only know the first few seasons), but they could look like anything - a floating, ethereal fat man, a bubble of glowing energy, whatever.

JOESKY TAX: WHAT IS THE I.B.O.S.S. AGENT HERE TO DO? A 1d10 TABLE:
1. It gives the PCs a really vague prophecy that it feels is really important. (The Vornheim Fortunes table works well here.) It will not explain further, and leaves.

2. Will follow the party silently, smiling if acknowledged, but doing nothing more than nodding and taking notes. Will disappear after the next fight or if attacked.

3. Wants to measure the Fighter's sword swing, will talk up his/her potential, then tut-tut and speak of how poorly s/he measures up to the last subject before disappearing.

4. Would like to observe the Thief hiding from everyone, bring a lot of attention to the Thief then wants him/her to hide, doesn't understand how awkward that is.

5. Asks the Magic-User to cast some spells while it takes notes.

6. Has brought along a very tough group of monsters from deeper in the dungeon, is all smiles and good intentions, "You seemed bored. I figured you'd enjoy helping me take some measurements!" Is no help in a fight, just takes notes.

8. Is pissed at the last dimension-hopping adventuring party for taking some treasure from here, returns 1d6x10 gold the current party were supposed to find. Will hide it or lock the chest where it's supposed to be right in front of them.

9. DIMENSION TAX! Asks PCs for 1d20+10 GP, or an item brought in from another game. Is VERY adamant and can do some creepy reality blurring magic stuff to try to scare them, but can't really hurt anyone.

10. Tells PCs where the next really interesting thing is, "You are meant to ________ it," but may not mention traps/monsters along the way before disappearing. Maybe he gives them a map.
Posted by Josietron at 12:35 PM