Unearthed Nostalgia: Some Tables I wrote in the '90s

Lace up your Docs and pull your spiked belt tight on those Z-Cavariccis with the 50in legs, here are some tables I wrote as a player and occasional DM in the dorm D&D game in '97 or so.

Found these in a box of old stuff the moms got out of storage. I have no idea if I was transcribing or making these up! 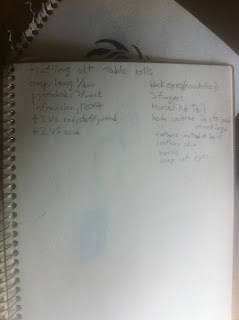 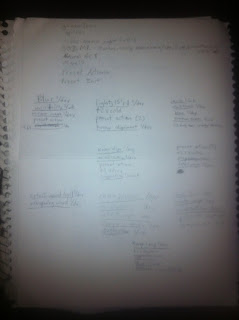 I'm still trying to figure out what this page was for, exactly. (EDIT - realized later this page is mostly batches of results from the d100 chart on the next page.)
As above, I've added numbers in case anyone wants to adapt this madness for use.
1. genderless
2. ageless
3. double normal sight (normal and Infravision)
4. 30% Magic Resistance - 1Illusions, 2Energy Drain, 3Charm/Fear/Sleep/Domination/Mind-Affecting
5. Natural AC 8ª
6. Move 15†
7. Preset Actions*
8. Preset Initiative*

After that is a series of small lists of mostly spell-like effects. I've turned them into a Multi-column table. These may have been recording abilities of monsters in a battle or results rolled on a bigger table. 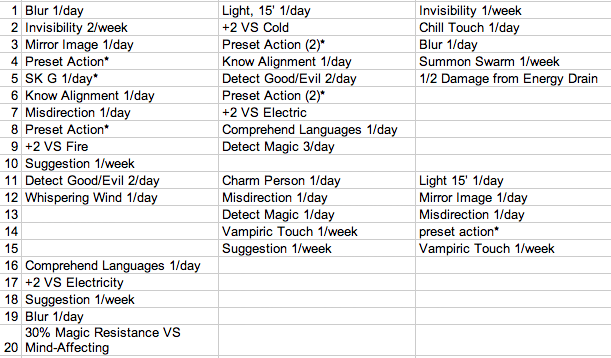 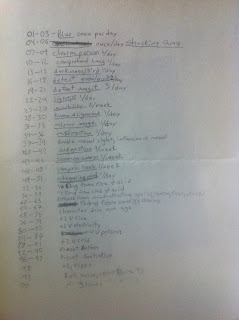 Teenage Joey, I'm proud of you. A gorram d100 chart. Now if I could only remember exactly what "Preset Action" and "Present Initiative" mean.
Clearer: 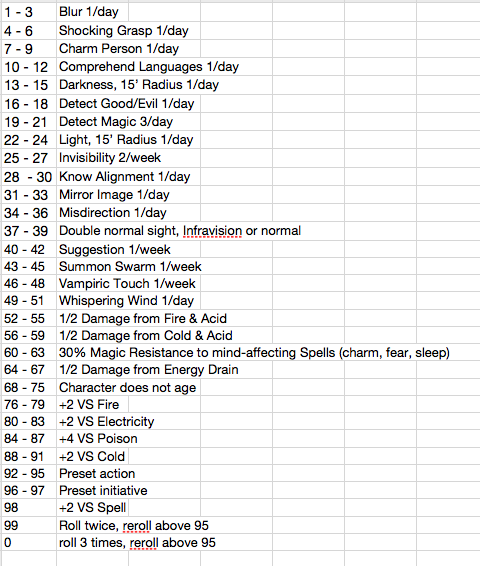 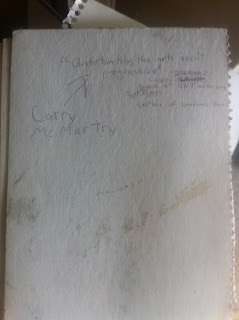 Posted by Josietron at 4:48 PM No comments:

Magical Mishaps
In cases where the effect was triggered by a spell, the lower number indicates the caster; the higher is the target. Where the effects do not refer to a spell or time limit, they are permanent until Remove Curse is cast upon the person affected.

Strange Items
The Iron Skull of Abaddon - If the incantation etched on this iron skull is translated and spoken while the skull is bathed in blood, a horse with a crowned human head, women's hair, lions' teeth, wings, iron breast-plates, and a tail with a scorpion's stinger will form around it and torment for five months anyone present who does not have a protective rune, etched in the skull's mouth, branded on their forehead beforehand.

Mirrors of Friendship - Anyone gazing into one of these small hand mirrors can see and hear out of the other.

Eminent Practical Guide of Much Breathless Happy Obsidian Plate for You - This 10in x 7in obsidian plate is activated by pressing a fingertip-sized depression near the bottom. At this point a manic, cute, breathlessly enthusiastic guide will appear in the plate and deliver a monologue of information about whatever the other side of the plate is facing. The scope, reliability, and detail of this information varies widely. The guide will respond to all questions with shallow pep talk and flattery, but will not deliver additional info or answer questions.

Gem of the Eternal Companion - when pressed to the forehead of a freshly fallen companion, this gem captures their soul. The companion so captured can manifest henceforth within 20ft of the gem as an audio-visual illusion, communicating, observing, but not attacking. Spells known before death that do not require a physical body to cast may still be cast by the captured soul.
Once per day per [level at time of death], the captured Eternal Companion may cast one of the following: Comprehend Languages, Locate Object, ESP, Detect Invisibility, Read Magic, Message, Identify, Detect Magic. (IE If the dead soul was third level, they could cast three of the spells from the above list each day).
The soul is destroyed if the Gem is, and the person whose soul is captured or destroyed thus cannot be raised from the dead or Resurrected by any means.
Posted by Josietron at 8:44 PM 2 comments:

A Little Break, or: Octopus Escapes Through 1in Hole

I'm going to have to take a break from running games on G+ and likely from posting here this month.
Busy moving 12 blocks away this weekend, then selling off most of my possessions and travelling/moving across the country the last half of this month. I had hoped to finish the Empire of the Flaming Moon rules by the time I hit this wall, but alas, no. I'll pick it up again in September, and hope to have EotFM finished and running games by September 15th. 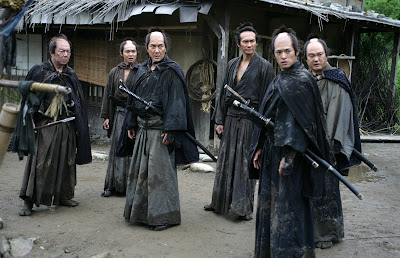 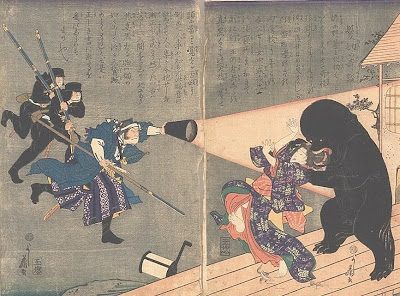 If anyone cares, here's what I'm planning and working on:
-hopping onto G+ games when I get some unexpected time (big urge to PLAY lately)
-finishing secret dungeon in time to playtest with live group while travelling, figure out if it's sellable or just pdf it
-finish EotFM rules and run games on regular schedule for 6 weeks or so Sept-Nov
-Hopefully run this horrible Kalak-Nur dungeon sometime around Halloween
-I'm reading Rogue Trader WH40K stuff for the first time now, and hope to mash it and Confrontation (precursor to Necromunda) into an RPG I can run over G+ this winter, switching it out with EotFM when I feel like it.

The goal with running G+ games when I resume will be a set weekly or biweekly schedule, probably something like 12 or 1AM EST Tues nights/Weds mornings. 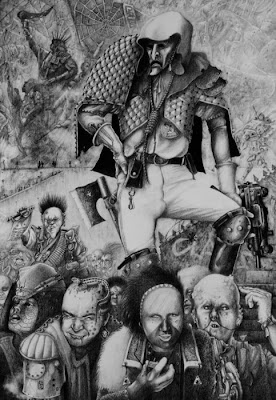 Posted by Josietron at 4:20 PM No comments: