Some Species and Classes of Panfalia (DnDish DIY Race and Class)

The madness continues. Note that the base system is Lamentations of the Flame Princess, but I am altering things to separate Race and Class. I'm call Race "Species" and adding an XP tax, essentially. 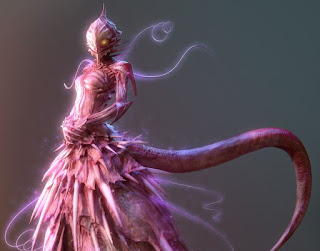 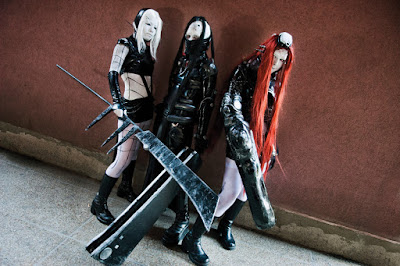 The offspring of a human and...anything else, pretty much. They are commonly the angsty "straight man" to the humor and optimism of the average Panfalian. Occasionally a Tiefling will end up just as jovial and earnest as the rest. 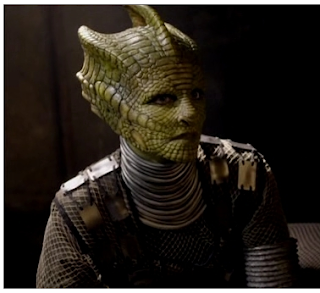 •Roll 5 times on the Tiefling Ability Table or 1d4 times on the Chaos Attributes Chart. Let me know if you have trouble interpreting your result as something LotFPish.

•Any Ability result on either table can be discarded for a roll on the Tiefling Special Side Effects Table.

•You may not choose your result at any time; if you play a Tiefling, you must leave your initial abilities to chance.
(click to make it bigger.) 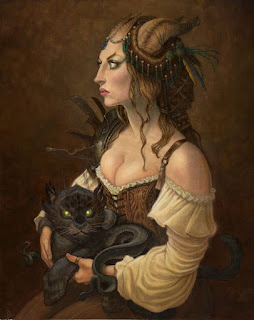 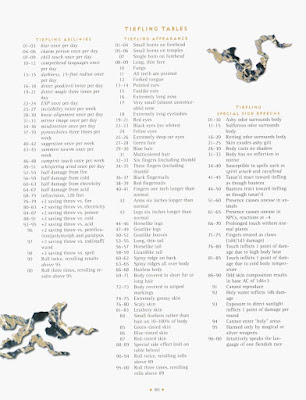 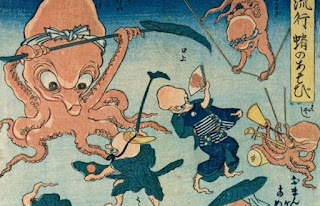 Octopus - inspired by +Michael Curtis 's blog entry here.
You are an Octopus. You can breathe both air and water. You probably live on land, even in a town, but probably have relatives that still live in the water - either at the base of the fearsome Sea Mount, or in the Ocean of Incompletion. Your head rises about 4' off the ground, and if you stretched out rrreeeeaaaalllllyyyyy far, your tentacles would be about 10' in diameter.
While there are Octopi of many types, the Octopi of Panfalia are generally known for their dry wit and luxurious taste. They will often adventure to gain fabulous riches, then blow it all on lavish furnishings and a lush (but tasteful) party. They are afraid of mustaches, however. 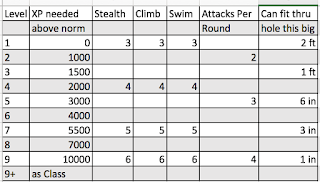 An Octopi's Stealth skill increases naturally as they age - this is reflective of their natural camouflage, getting better at mimicking their surroundings. Likewise, their ability to use the suction cups on their tentacles to climb. As they get martial experience and their balance improves, Octopi learn to balance on fewer tentacles and use more for activities like attacking. This does not allow those of spell-casting classes to cast more than 1 spell in a round, however.
Octopi have malleable bodies, allowing them to fit through small spaces. The lack of an internal skeleton makes them less structurally sound of course, and they may only carry half of what a human of similar ability scores could. Also, all armor must be especially made for the Octopus, and costs 10x the usual amount.
Note the addition XP required to reach each level above that required by the Octopus's class. 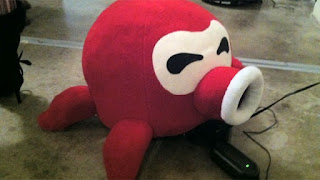 This species of Octopoid left the water long ago, and have developed some odd adaptations! They only have four tentacles, and their bodies occasionally produce an internal rock - which they can eject with great velocity! These rocks have a range of 40', and firing one takes the Octorok's entire round. Add any bonuses that would normally apply to projectile weapons.
An Octorok may attack with a bare tentacle for 1d4 damage. Octoroks can re-roll a miss in melee combat if a second tentacle holds a weapon or is free. They must balance on at least two tentacles at all times.
An Octorok can leap 10' high from standing, and leap twice their normal move if they haven't fired a rock this round. 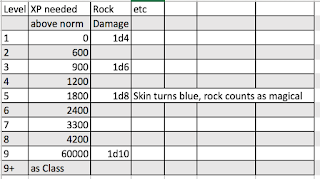 Octoroks may carry normal shields, but can only wear specially made armor that costs 10x the usual amount.
They have something of a rivalry with Octopi, but it is more of a bickering, one-upsmanship relationship than outright fighting. 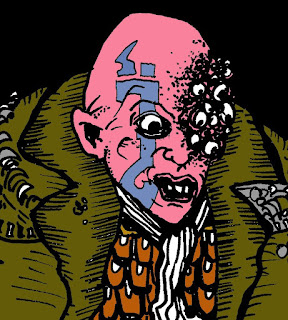 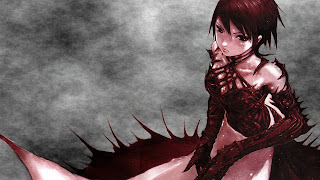 Pretty much as written here by Jeremy Duncan (who drew the picture above) or in Secret Santicore 2011 (I know they are slightly different). They require the same additional XP to reach each level as Tieflings do.

XP Requirements:
To be written in the future: Magical Animals (think Jake from Adventure Time, but he's like level 10).

The long peace of the Beast-King has led to a proliferation of information and a complicated network of apprenticeships across Species boundaries. Any species above (plus Humans and Magical Animals) may be any Class. 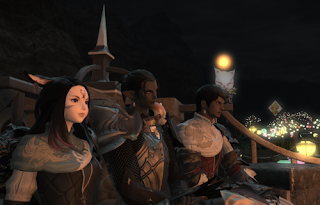 Fighter, Specialist as LotFP. No Magic Users or Clerics.

Ranger as LotFP Halfling, but as a class. 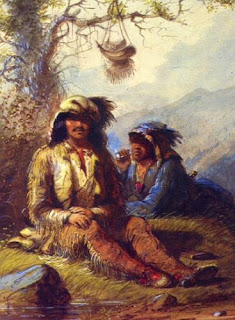 Dream Hunter as written by +Patrick Stuart here. I can feel him cringing at "Dream Hunter".

EDIT: can't forget Alices as written by +Zak Smith and featured in A Red And Pleasant Land. Panfalia has those, too.
Posted by Josietron at 4:26 PM