Before humans built their cities, before they gained speech and fire, Giants, Titans, and Gods waged war across the land. When they fell, insects and men fed ignorantly, instinctually on their fallow flesh. Some laid eggs within. These creatures, fed from birth and incubated in the flesh and blood of fallen Gods, Giants, and Titans, grew into those magical races which populated the land after the Gods left.

Nibelung began life as maggots feeding on the flesh of the Titan of the Forge, the Giants of Earth, or various fallen Gods. The other gods gave them sentience, as punishment. The maggots became curious, and burrowed to the surface of their hosts. When they saw the terror and majesty of the bodies they had fed on, the Nibelung wept; they changed.

Each swore to forge the materials over which they were given majesty in beauty and terror equal to that upon which they had fed. Most have forgotten all that. They do not die, except from violence.

*All Nibelung have -2 to all rolls in direct sunlight.
*Nibelung can see in darkness as a human can in bright light.

Nibelung of the Forge
These creatures are 3-4 feet tall, with tufts of shaggy hair in odd places and stag's horns which grow with age. Their skin is brown, red, or purple. They have the urge to make things which involve fire, so: forging metal, cooking, brewing, etc. They do not produce offspring, but occasionally an adolescent will wake deep underground with no memory and begin wandering the world. They despise sunlight, but crave the dim glow of a fire or forge.
as PCs:
*Ability Adjustments: -1 STR & CHA, +1 CON & WIS
*+2 to forging, brewing, etc

as PCs or NPCs:
*Given access to a forge and tools, they can make or repair any small metal item (dagger, helm) in 8 hours, medium (shield, short sword, hand axe, armor +2 AC) in 20, and large (long sword, battle axe, armor +4 AC) in 36, and large weapons or armor +6 AC in 72. The times listed are hours spent at the forge. Conversation and light activities can take place, but nothing that takes them too far from the forge.
*They can brew potions or salves that will heal HP equal to their level at the time of brewing, one per 4 hours over a fire. They need a fire, sufficient roots, fungus, seaweed, and/or mushrooms.

as NPCs: use the stats not described above as Deep Elves or Duergar in your system.

Nibelung of the Earth
Standing 4-5 feet tall, these creatures have a thin body of wood and leaves, with a patch of branches on their back amongst which fungus grows. Each carves a mask for their face, which holds their memories. It takes months to carves a new face, but they covet memories and only carve a new one when in need. Swamps, caves, and deep forest are their typical habitat. It is said they each forge threads of fate into the weave of time.
as PCs:
*Ability Adjustments: -2 STR, +1 INT and CHA

as NPCs: Use the stats for forest Elves or Gnomes in your system.

Nibelung have a different relationship with gods than mortals do, and cannot be Clerics, Paladins, or any other class involving Divine power.
Nibelung Magic-Users of any kind have a chance of accidentally casting a random Summoning spell (1-10 instead of the intended spell; 11-20 in addition to; 21-99 no Summon; 100 Summon in addition to as if five levels higher).

Upon reaching 10th level, some Nibelung begin to change into Dragons. If they choose this path, they have max HP equal to the GP value of all items in their possession, and crave more.


And what of Nibelung of the Gods? If you have encountered any, I'd love to know about them...
Posted by Josietron at 2:40 AM 1 comment:

Thinking about a recent Scrap Princess drawing caused this to pop into my head while my subconscious cogitates on Santicore matters.

+Tom Tyson requested that +Scrap Princess draw a "Jack-O-Bear", and she drew this: 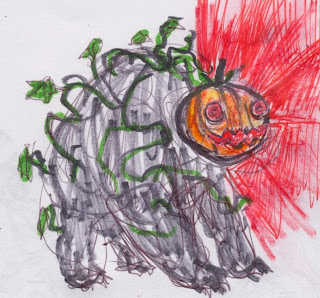 Many living near Forbidden Zones are familiar with the seasonal escapades of the JackO'Bear  These bizarre beasts wander into town every year at the seasonal change from Fall to Winter seeking treats and whatever trinkets of civilized ingenuity can amuse them. They are known to break into poorly secured shops, empty out larders, overturn garbage, free mounts, and steal all kinds of small moving gadgets for amusement (crossbows, jointed farming equipment, simple hinges, etc). During this time streets are empty of townsfolk at night, and sweet treats are left in front of dwellings.
Young JackO'Bears are covered with vines that provide them some damage resistance. Eating the leaves will provide a robust natural healing to any creature able to digest them, but causes the vines to die.
While still flush with vines, the young JackO'Bears are easy to hit but difficult to damage, making them very playful and trusting. They assume all creatures enjoy sparring as much as they, and will attack as a friendly greeting.
Mature JackO'Bears have usually been plucked of leaves in their sleep by enterprising wanderers, and/or been captured and held a winter for some nobles' amusement, and are thus wary and aggressive.
Whether young, carefree, and seeking a playmate, or old, aggressive, and wary of strangers, they tend to approach the same way - by detaching and throwing their heads, with regrow in 2-5 rounds. During that time, the creature is blind, deaf, and mute, but also silent and nearly impossible to see in the dark.
All JackO'Bears' heads glow with an inner fire, which provides light as a campfire around the beast's head.
If the head has been thrown, this lights in the regrown head at the end of 5 rounds - unless the flame from a previously thrown head is kept alight after exploding. In this case, the newly grown head does not have a flame, and the Bear has impaired vision and -2 to all relevant checks (but a +4 or 20% bonus to stealth) until the old flame is put out.

Stealth in daylight in wooded areas is as that of a 10th level thief. At night it is half that unless their head light is dark as detailed above.

As mounts, JackO'Bears are nearly impossible to keep tame. They require a weekly reaction roll (or however you handle taming wild creatures) when in civilized areas, and a daily roll in wilderness. When this roll does not favor the rider, the JackO'Bear will wander off at the first opportunity, using wit and stealth if need be.

Knights often quest to capture one as a pet for amusement over the long winter, then release it in the Spring.

Rumors about the JackO'Bear:
1. They eat the souls of misbehaving children
2. Are avenging spirits of the recently dead
3. Faeries and similar creatures will be revealed in their true form by a JackO'Bear's light, removing illusions and invisibility (t)
4. Magic spells of invisibility and illusion cast by mortals are dispelled by the JackO'Bear's light
5. Faeries will avenge the slaughter of any JackO'Bear
6. Faeries ride them as mounts
7. Faeries hate them (t)
8. All knights of Escavalon must eat the head of a JackO'Bear before being knighted
9. The blood of a JackO'Bear will keep a fire lit forever
10. If one does not pluck the leaves, and wrestles with it often, they can be good and loyal mounts (t)

The last one stops being true the moment any of the leaves are plucked.
Posted by Josietron at 3:31 PM No comments:

Someone was worried about this year's Secret Santicore since I hadn't said anything in awhile, and I'm like WTF man I just didn't want to bore everyone, but maybe I should give a quick update.

I haven't been talking about it as much, since the only exciting thing going on is how awesome all the entries are. We're still getting in a few entries from people who had extenuating circumstances delay them. The Handlers are awesome. I've gotten some great advice and offers of help for making the whole thing a PDF.

* Basically: Santicore is rolling on, doing great, still on schedule to be released before December 23rd. Hopefully more like December 15th, but I can't say that for sure. *

There are a few people who've dropped off the face of the Earth, and attempts to contact them are coming up short, but I think it's best to deal with that privately.
If you haven't been in touch with anyone and haven't turned in your Secret Santicore submission, please contact me or a Handler ASAP and let us know what's up.
The Handlers and I will fulfill any orphaned requests if we haven't heard from the people fulfilling them starting Friday.

Posted by Josietron at 10:29 AM No comments:

Email ThisBlogThis!Share to TwitterShare to FacebookShare to Pinterest
Labels: santicore

How is this NPC going to treat the PCs?

Inspired by an interview with Michael Emerson (on Nerdist I think) and a need for something to jog my improv during games: 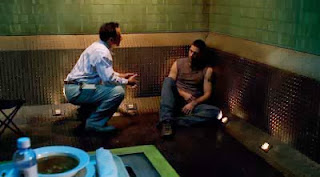 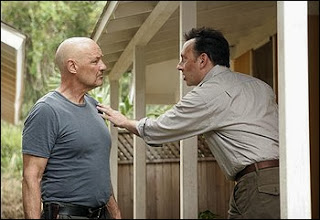 Posted by Josietron at 12:18 PM No comments: