"Blood-Tree Tunnels of the Swamp Witch"

In a fit of wonderful birthday insanity Monster Johnson made the map below in inimitable DIYpunk fashion, based on the suggested titles from Jack (Caves of the Swamp Wives) and myself (Blood-tree Tunnels of the Swamp Witch). 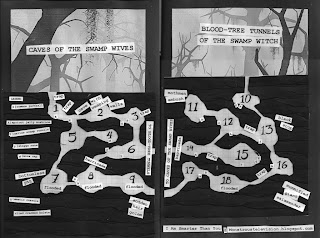 My Key for the Blood-Tree Tunnels side:

The Tunnels are made from living ROOTS of Blood-trees guided into their current shape. Upon touching the wall, there is a 2 in 3 chance any creature painlessly loses 1 hp per round as the roots absorb blood. On the 3rd consecutive round touching the same spot, the roots will ensnare the creature, requiring significant force to break free. On the 4th consecutive round touching the same spot, the creature loses 1 CON point per round until freed from the roots. At 3 CON the creature is released under the roots' control, with its only desire to put other creatures in the roots. CON points and sanity are regained with food and sleep.

10. This humid, dank cavern is dominated by PUFFBALL MUSHROOMS covered in tiny spines. Interspersed are dead, naked bodies. If disturbed, the mushrooms release a 5 ft cloud of spores in the area (save fails: blindness for 1d4+1 rounds / passes: 1 round of coughing.) There is no path through the mushrooms, but profuse vines hang from the ceiling. The vines break 1 in 6 times they are grabbed, but are otherwise useable for swinging across the mushrooms without disturbing them. Some of these vines may be blood-tree roots. Swinging over the mushrooms takes 3-6 vine swings. If all the mushrooms are destroyed in the left half, a secret path to area 11 can be found.

11.This room is piled high with mouldering clothing of all types. 3-6 Immature Mothmen use areas 10 and 11 and are immune to both mushroom spores and blood-tree roots. The Mothmen swoop from the ceiling and gain surprise, immediately attacking anyone entering area 11. They will place any creature affected by their Hypnotic Wings against the wall for the roots to feed on. They have coincidentally never encountered the Swamp Witch.

One beautiful JELLY MUSHROOM grows here, which if eaten negates the effects of roots, puffballs, or Hypnotic Wings. *

IMMATURE MOTHMEN: AC 9 or 11; MV (as human, same flying); HD 1 to 4; AL N; ATTACKS: normal spear or: HYPNOTIC WINGS - save or be immobilized, staring at wings. New save when damage is taken, every 3 rounds if damage by ROOTS.

12. A few more Jelly Mushrooms grow here. The northern wall is dominated by a huge, floor-to-ceiling bookshelf. The books are histories, novels, and plays from long-dead societies and folio collections of rare art prints. 1 in 10 chance any book checked is hollowed out, actually containing a tragic gothic romance. There are also several children's books with strong female heroines. There is one comfortable chair, cracked and dirty. Anyone picking up one of the SKULLS interspersed as book-ends is attacked by it; see area 17.

If more than 2 creatures walk between areas 12 and 13 at the same time, the whole floor collapses and everyone on it falls into area 17. This is detectable as a pit trap by trap-detecting types. 6 people can fit, single file, before it collapses. If collapsed, the only passage is by holding onto Blood-tree roots.

13. A boiling kettle of shiny black liquid bubbles over a fire. Any creature looking into, touching, or eating it spends the next hour moping vocally about their choices in life. Affected creatures just want to lean against the wall and cry. A save is allowed for every round they are slapped by another person, with cumulative +1s per round slapped. The effect takes place even on characters who have previously saved.
A SHAGGY INK MUSHROOM grows from the wall. Disappearing ink can be milked from it while it is alive or the first round after it is picked.

14. A cluttered laboratory, jammed with shelves piled high with ponderous tomes of magical research, jars and flasks full of noxious powders and liquids, bizarre apparatuses, open flames, and tiny caged humanoids, living and (un)dead, about the size of a thumb. If too much of the equipment is disturbed, disembodied hands attacks from the clutter. The shelf blocking the tunnel at the back cannot be moved without at least 6 rounds of contact with blood-tree roots and at least two creatures of exceptional strength. If the liquids or powders are consumed, they produce random potion effects, or make you feel bloated. Alternatively, any potion consumed causes one to switch places and sizes with a tiny, caged humanoid.

15. LAIR OF THE SWAMP WITCH. One side of this cavern has a four-poster bed, a large, comfy chair, and a dirty, scarred table littered with books and candles. The other side is a mushroom garden, full of yellowish, normal-looking mushrooms. There is a 3 in 4 chance the SWAMP WITCH Albixa (Dusk Hag Revenant) is here. She is lonely, and wishes to engage newcomers in conversation as long as possible. Coincidentally, she is completely unaware of the Mothmen using areas 10 and 11.

If attacked, she will activate EMETIC MUSHROOMS which float over intruders' head on clouds of noxious methane and pour acidic blood on them. *

16. Jelly mushrooms (see area 11) and Puffballs (see area 1)grow here. There is a case full of decaying scrolls and trinkets that falls over toward the Puffballs when first touched. It's door is extremely creaky. There is a pristine magical ring with a red ruby that contains the essence of an evil chaos sorcerer; he cannot cast spells, but can communicate telepathically and will try to convince anyone he contacts that there are vast riches in area 17. He just wants to watch things die. The ring magically returns to the case in 2 hours if removed.

If the case is not in it's original position when the tunnel between 16 and 18 is entered, the tunnel collapses and anyone on it falls into the water in area 18. If more than 10 minutes is spent here, Blood-tree Zombies are released from the walls (see 17)

17. Emetic Mushrooms float up and vomit acidic blood (digested from the roots) on anyone who ventures here, with increasing frequency toward the back tunnel. The ground is littered with old bones, weapons and armor eaten away by acid, and gold pieces. Two hungry kobolds named Bon are trapped in a raised niche in the wall, and will give a magic knife and bracelet to anyone freeing them. They might know where a treasure horde is buried in the swamp above. The floor here is littered with Skeleton Heads, and there are a few Blood-Tree Zombies that want to push people to the walls.

18. This chamber is flooded with greenish liquid that smells of the acid vomited by the Emetic Mushrooms. Vines hang from the ceiling; they can be used to swing across, but break 2 in 6 times. There is a 50% chance any vine grabbed is a Blood Tree Root. In the water is a Mummified Giant Salamander. He attacks anyone making noise or near the water. He will not attack anyone paralyzed by fear at seeing him, but nudge them toward the root-wall with one of his attacks.

*11. If a party does not attack for a full round and is not interested in their "treasure", the Mothmen immediately stop attacking and attempt to have a pleasant conversation; they are desperately lonely. They will explain that they were sent by their tribe as sacrificial husbands for some Swamp Brides, but lost their map to the Swamp Brides' caves and found these tunnels instead. Their "treasure" is clothing gathered from dead bodies in the swamp and tunnels. This clothing is their food.

*15. She is not hostile, but will be towards anyone who damages her laboratory or garden. She has many items infused with magic power from her experiments. She only cares about areas 12, 14 and 15.
If engaged in conversation, her topics are: her dreams of the future that she misinterprets as ancient history, history she has read about or experienced, her hated sisters who she "exiled" long ago, her beloved salamander, and the herbal medicinal needs of the local town, who consult her on a regular basis. If she is pleased with someone, she will grant them "dreams of wondrous history" - prophetic dreams for 1d6 nights.

*16. There are several empty slots, with a note saying "Borrowed from down the corridor, will return soon." The note is so old it crumbles after being read. If the salamander is mentioned, the ring sorcerer will claim Albixa stole it from him. If the ring is mentioned to Albixa, she will just exclaim, "What a mistake HE was!"


--
I think this works best if the PCs need information only Albixa can tell them, or an item in 17.

Let me know what you think!

(edited to put flavor at bottom, breaking up chunks of text)
Posted by Josietron at 8:08 AM