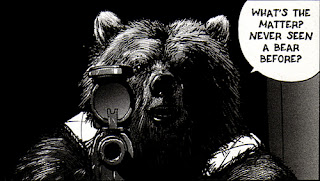 image from the manga BioMega

Shardik are, essentially, bears with the intelligence and language capabilities of humans. Their fingers are more articulate than a normal bear's as well. 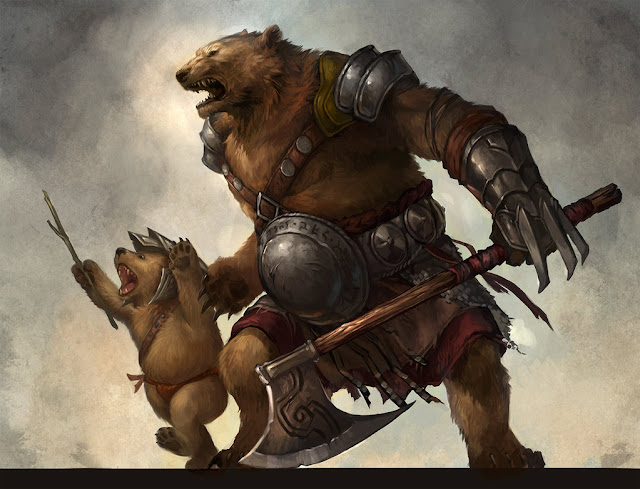 Aw, lookit him training the little guy...art from here

(If something is not specified below, assume LotFP rules apply.)

Ability Scores: Having a high Dexterity may help due to the lack of fitting armor; a high Wisdom will help the PC use many of the abilities below to great effect. A high Strength is thematic. The DM may impose Charisma penalties based on the fact that you're a bear.

Experience: Shardik advance as Dwarves (or Rangers if your system has that) with regard to the XP needed to gain a level.

Being bears, Shardik have big ol teeth and claws. They can make a claw attack once per round for 1d6 DMG if at least one paw is empty.

It is hard for them to wear armor, but Shardik have a natural AC as if wearing leather armor. They can have custom armor made for them, but the DM should make it appropriately expensive and determine its effects on the character's abilities as gained below.

(The following is heavily based on Zak Smith's random Ranger and Fighter classes from his blog.)

Start with the hit points and saves for a 0-level Fighter in your system (if it has a Ranger, hey, even better). Write those down.

At first level, and each time you level up, you get your hit points as usual, but instead of the attack bonus and saves improving on a schedule, you roll twice on this table (you can choose from items 1-40 instead of one of the rolls, but no doubling up on one item in the same level in that case).

Do what it says--there are also indicators of what to do if you re-roll that same result over again in places where that's hard to figure out...

#30-32 Climb as a Specialist or Thief of the same level (if using LotFP Skills, increase Climb skill by 1, if rolled again and using 1E, move one level up on the chart; for more detail consult Zak's Random Thief)

#33-35 In any wilderness environment you will know whatever organic life has been there in the last 24 hours including all typical wandering monsters, and you know about anything that's been there in the last week on a successful roll-under-WIS or roll-under-level (whichever is higher) check. Re-roll this result and it extends to dungeons, then to cities, then to inorganic life. Then if you keep re-rolling you can always do the "everything in the last week" thing in the wilderness, then in dungeons...

#36-37 Christ you're big. +2 to checks to intimidate people. +2 when your re-roll this thereafter. You're all, "RARRRR I'M A BEAR MOTHERFUCKERS!"

#38-39 "SNIFF SNIFF, smells like dinner!" In any wooded environment you cannot be surprised and will always notice anyone coming at least 2 rounds away. Your experience with the landscape and the way it grows allows you to search a wilderness hex at twice the ordinary speed and if you are pursuing or being pursued through the wilderness you add your level, in feet, to your relative speed for purposes of determining who catches who. If you re-roll this, the expertise extends to all outdoor environments, re-roll again and it goes for dungeons, re-roll again and cities, again and it works in like the planes, re-roll again and you should probably just re-roll on this table until you get something different.

#40-41 With a successful WIS check, you can pass through wilderness areas without leaving any trace or making any sound. You can get right up to someone and they will not notice unless they can see you or you purposefully make a noise. This isn't supernatural, and taking nearly any other action but movement and observation will make a noise, at the DM's discretion. If you want to do the movie thing where you take out the guards silently one by one, keep in mind: you're a bear, not an Assassin. Unless you're an Assassin (see below). Roll this again and add +1 to the check. Roll a third time and add your level to the check. Roll it a fourth time and you should reroll.

#42-43 You can knock prone or shove (10') anything that is animal intelligence up to the size of a bear in addition to also doing the usual damage on a successful melee hit. Subsequently re-rolling this result gives you the same advantage against creatures of any intelligence, then a +2 to damage vs animal-intelligence foes, then vs people.

#44 You are capable of one incredible burst of speed once a day. You can move at three times your speed and knock an opponent man-sized or smaller prone at the end of that movement. Twice a day if you roll this result again, etc. Your AC is increased by 2 until your next action.

#45 On a melee hit on a human-sized or smaller opponent you can do your ordinary damage plus your opponent is grabbed if they fail a strength check. Note grabbing is not always what it's cracked up to be since now you're vulnerable to attack from elsewhere, but enjoy it while it lasts. If you reroll this result they get a penalty to their check, +1, then +2 etc.

#46-47 ROAR!! You can let loose a stunning roar once a combat. Enemies save at a -2 or do nothing but reel in place for a round, shivering in fear. Your buddies get +2 to their save. Roll it again and you can do it twice per combat. Roll this a third time and the saves are -4/+4. Roll it a fourth time and no saves are required - your enemies are stunned, your allies are a little freaked but able to do stuff. If you roll this a fifth time, you should roll something else. 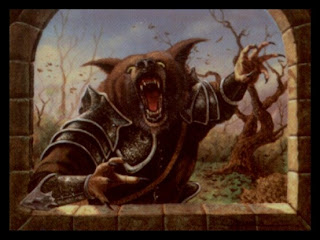 #48-49 You can make a second claw attack per round, as long as both hands are empty. If this is rolled again, you may make a bite attack for 1d4 damage in addition to your claw attacks; the bite is a critical hit on a 19 or 20. SNIKT-SNIKT! (If rolled a third time, your crits do triple damage. If rolled a fourth time, reroll)

Shardik can track anything with a smell with a roll under check against Wisdom or level, whichever is higher.

They can survive in the wilderness without aid from technology or society. With a successful roll-under Wisdom, a Shardik may provide food for a number of others equal to the number of success divided by 2 round up (if succeed by 3, you may feed 2 others one meal or one other 2 meals.) This is in the form of fish, small game, berries, and other edibles from the local flora and fauna.

Humans and other intelligent species cannot tell a Shardik from a normal bear unless they witness it speaking, wearing armor or weapons, or behaving in an otherwise unnatural manner for a bear. Normal bears treat Shardik as any other bear, and will be friendly or aggressive appropriately.

Shardik start out knowing how to speak to bears and the local humanoid tongue. They have additional languages equal to their Intelligence bonus. When they encounter a new animal or humanoid, they may attempt to learn it's language, adding their Intelligence bonus to the roll.
They can communicate extremely basic concepts to any forest animal, regardless of language.

If the player wishes to have skills from another class, they may use XP to gain a level in that class (starting with 1) instead of the benefits above (rolling on the chart, Fighter HP, etc.) at the DM's discretion. Upon gaining a level, the player must declare which class they are working towards for the next, and have diegetic reasons for their character to gain those skills (IE studying under a master, etc)

Shardik never gain followers or set up a compound. Instead, at each level the player may record an animal they have befriended during play or seek one out. Over time, as they check in with those animals and befriend new ones, they gain a network of creatures that trust and confide in them. Starting at 8th level, a Shardik PC may start cashing in on these friendships. Thus, they have a natural area in which they are protected and have eyes and ears everywhere. Examples include a specific wooded area, cave system, some milage of plains, or other natural environment. Of course, if they treat these creatures badly or do not make this effort, they will have no such network.

They are usually isolated and territorial, but seek out another of their kind to socialize with once a month. It is unusual for them to go adventuring, as they see tending to their home forest a life's work. If near humanoid settlements, they sometimes make treks into small towns to play games with whoever's around. "Old Clebus has been coming into town once a month to play chess since I can remember. He's patient, too! Beats me every damn time." 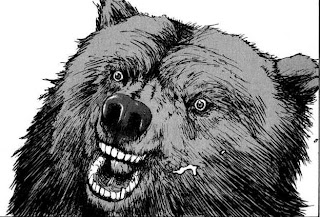 I wrote this up at the request of a player in my home game. They had met an NPC Shardik, then his character died a couple of games later (never split the party. NEVER SPLIT THE PARTY.) I told him he could be whatever even though the world had been relatively low magic, and he wanted to be one. The abilities above are based on his choices from a big list I made, then I added a few more and randomized. I put stuff in from LotFP and AD&D 1E to cover all the bases.
Posted by Josietron at 8:35 AM