Random Class Generator or "What are the NPCs over the next hill like?"

As +Christopher Helton said, this Random Class Generator is nifty. Go check it out!

While cool, it's utility when used as directed is low for the majority of DMs. OK, occasionally you're going to let a player play his flying Dwarf with Thief abilities that uses magic like a M-U at a 60% level penalty, because flying monkey, right? Or maybe you run a special session where you let everybody use one of these. Still, you use it once and everyone's got a character and done til someone dies. And that's fine, but after looking at the results a few times I think there's a way this generator is useful to the DM pretty frequently. That starts at the *


The first class it generated for me is one of the most immediately useable and straightforward things I think I've seen from a generator. This is the spear-carrying hunter who can sneak up on prey. It also makes a lot of sense for a Harpooneer or Landsknecht that decides to go adventuring. In more practical terms, a long-range backstabber (if there's some player skill and party coordination going on.)
I think I'd say they get a -2 to hit with non-polearms instead of not being able to use them at all, but the rest can play as it lays.

Armour Members of this class may not wear any armour.

Weapons Members of this class may only use pole weapons (polearm, lance, javelin, spear). 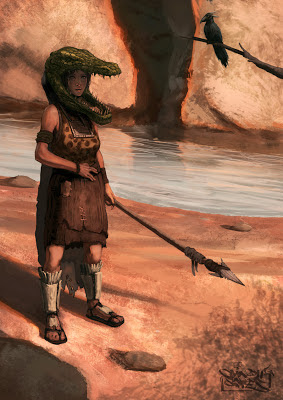 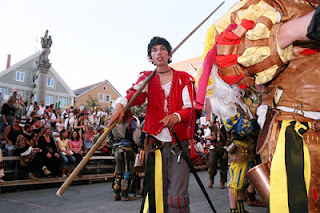 * However, here's where the juice comes in for the DM. You can use this to extrapolate the weird cultural practices of the NPCs or even Monsters encountered in the next room/hex/tribe/whatever. This would probably work well in combination with Zak S's Gods as Places to fully flesh out a hex. (EDIT: If you're going soup-to-nuts and want more monster/NPC stats like attacks and AC, try this from Abulafia or this from donjon to add to the below. Works well to flesh out Villain Warbands.)
Let's say you're using Carcosa (either the book or generator) to do the heavy lifting for hexcrawling in your game, but you're not running a Carcosa game.
"Hmmm...Village of 220 Ulfire Men...so in my game, those are..."

OK, so these folks really value being tough and feats of strength. They probably go shirtless and either live physically demanding lives and/or have strength training and scheduled contests.


Hmm, but they're easy to kill. Maybe they're small? Like, little strong pygmy dudes? I'd use this as the number of HD of NPCs, not the number of HP. Strong but low HD. 1-4 d8s.

Shit, little strong pygmy dudes with polearms. As the next entry tell us, they attack better than magic users, but maybe not as good as fighters.

So there's a 60% chance a party of these guys has a shaman or other magic user, and/or a 60% chance each one has some spell or tribal charm that has an effect.

"So these folks prefer polearms, value Strength, but aren't hard to kill. They're sneaky and magic use is widespread - 60% of the population. Eventually they get Dwarf abilities...maybe through some practice where meditation on the Erf pays off. OK, so I've got a pygmy tribe (or Goblin culture, etc) that uses magic and moves quietly and practices some kinda warrior mysticism and for some reason they revere the polearm - probably cause they value Strength but are easy to kill. OK, Ulfire Men are that now." Werido demihuman tribe infesting the ancient temple? DONE. 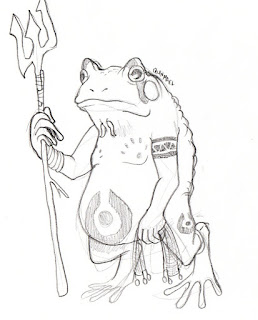 --
I'd love to see what weirdo classes you folks get outa this, or weird cultures extrapolated therefrom.

Here is a cool pictures I came across looking for relevant images: 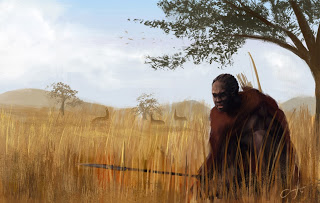 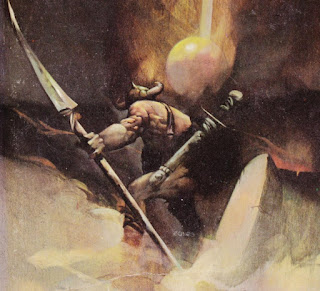 Jeffrey Jones does a great Conan

Posted by Josietron at 9:20 AM