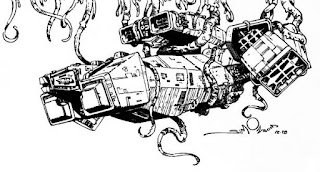 So there I am driving a big moving van all around the Bay Area, picking up my friend, moving my stuff, waking up early the next morning to move a couch on 3 hours' sleep...and I see some bumper sticker I've already forgotten and it makes me laugh and I think about what if the people who play in the WH40K RPG I'm gonna run put bumper stickers on their ship. 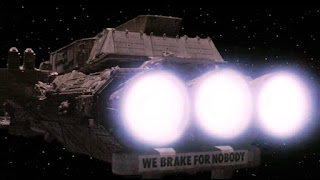 Then I think, "So who actually puts the bumper sticker on the ship? Like, when are they able to be outside to do it?" And I imagine a person in a space suit floating outside the ship trying to put a bumper sticker on in the big awkward pressurized suit looking through the fogging up visor. I think about the moving van around me, this big machine humming under and shielding me, and I think about how you probably never see the outside of your spaceship with your own unfettered unmediated eyes unless you're about to explode from your inner pressure in the vacuum of space. 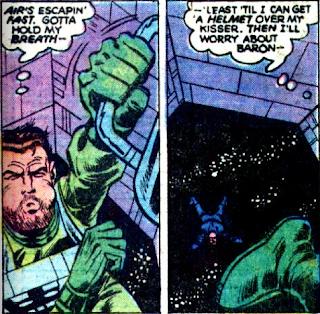 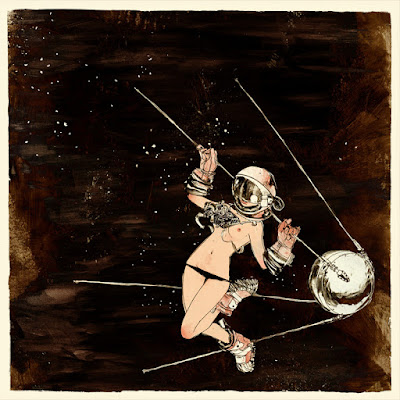 Because in a universe that has had several distinct periods of ship building on a massive scale in massive numbers like the W40kverse, they'd be building ships in space, or at least assembling them there*. The ship wouldn't be assembled in a hangar on the ground where some mechanic or the future pilot could just slap a sticker on no problem. I guess people being people, some clever duck could put the sticker on one of the parts manufactured on the ground before it gets shipped skyward to be assembled, but that's probably not going to be someone that will end up in the ship.

It would be rather strange to live in, rely on, operate, and call home something that you could never truly see the outside of and comprehend in it's totality. That any authorship of the outer appearance of this thing that is so involved in your life would require great efforts and expenses.
(but Joey, what if I'm just looking out the porthole of another ship at it? Shush, I say, I think I'm getting to a point, and in the fictional situation such an opportunity would be a rare and awesome gift) Simonson, from the Alien comic adaptation

...which means the ships don't have to be aerodynamic. At all. They never have to leave an atmosphere, or enter one, for that matter. The ship can be built to accommodate an internal purpose, such as maximizing internal space and minimizing the need to maneuver, or an external purpose, such as flying through a vacuum the most efficiently. Or just to look fucking cool. Even if you yourself will never really see the outside, barring some disaster. 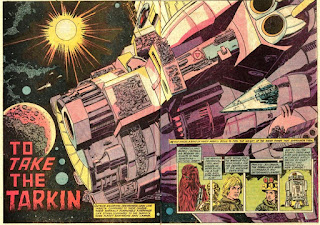 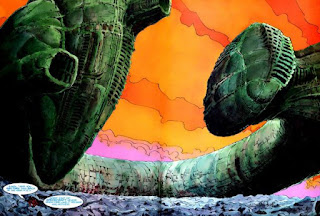 So spaceships are closer to architecture, but informed by shipbuilding. Then you have your landing craft, which do need to be aerodynamic, and maybe you have ships that are multi-purpose, that are both aerodynamic and built for long term space travel. Your choice of ship has implications on what you and it can do, and how you do it. 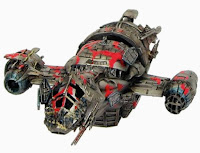 The purpose of all this rumination on spacecraft is that I'm used to running ostensibly medieval fantasy games, and I want to run sci-fi games. I'm thinking my way toward it, starting with the biggest difference affecting what the players can and can't do: they have a giant technological marvel that can potentially massively change their circumstances. I'm interested in making that as relevant as possible and part of the game, or at least giving them a choice for how much that will be part of the game.

I'm trying to get it to where it can be a game where "treasure" is sometimes wealth but often it's seeking out more resources to improve your ship. Or at least the players can choose to do that. Starting with a ship that can do some things decently, other things terribly, but by either improving your current ship or scheming to get a new one, you can change that balance or soup up a current ability. Speed, maneuverability, weapons, life support functions, warp travel, etc. Oh - and fuel. Maybe your ship runs on some fusion reactor or special crystal, but starting out, you're gonna have to keep it fueled up and/or find places to dump the waste. 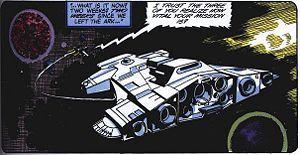 I wanted to avoid the situation where it becomes DnD with a sci fi shirt on and a ship taking the PCs places instead of a horse or whatever. Make the technology inherent in the guts of it - if the players want that. I think ship maintenance could be a good motivator and encourage problem solving, but if it ends up taking away from the fun I can, of course, put a ship that requires less maintenance in front of them for them to problem-solve their way toward.

*I know, I know, this is probably covered ad nauseam in GW books I haven't read, but I'm trying to keep the books I'm basing my game on to a minimum∆.
I did wonder if I had my physics right and whether this would actually be more energy efficient than building ships in atmosphere, but the internet has me covered.
(in addition to countless blogs I did not link)

∆ Hey, look, it's a footnote to a footnote to a blog post, could I get any more pretentious? Anyhow, here is the list of books I'm basing my WH40k Rogue Trader RPG on:
- Warhammer 40k: Rogue Trader (GW 1987) (the bible for setting and rules, although rules fleshed out by other books extensively)
- Realms of Chaos: Slaves to Darkness (GW 1988) (same as above)
- Rogue Trader (FFG 2009) (mostly for the ship rules and some version of the background path thing)
- Basic Role Playing Quickstart (Chaosium 2009) (for the guts of the character rules, I think)
- Warhammer Fantasy Role Play (GW 1986) (will be combining the career / skill ideas from here with both CoC and RT 2009)
- Call of Cthulhu (Chaosium 1999ish) (to see how some BRP stuff fleshes out plus Chaos!)
- Stormbringer (Chaosium 1980s) (same as above)
- Inquisitor: Battle for the Emperor's Soul (GW 2001) (setting depth; may start a second party based on this book)
- Confrontation / Necromunda (GW various) (Setting depth, some rules maybe)
- Stars Without Number / Traveller / ROC: The Lost and the Damned / other GW stuff (various) (will probably consult for additional ideas)
- Starfaring (by Ken St Andre, if I can find a copy, for some thoughts on ship maintenance and random tables)

See? My bibliography is already long enough!
Posted by Josietron at 12:56 PM