"Many times the very intelligence of man causes him great difficulty and inefficiency when compared to the dumb, natural beast. A man will gut a fish and eat the flesh of its middle, while a ravenous bear will often simply bash the head open and suck out the brains. The bear receives more nutrition, and has no distaste for such activities. Many such of nature's little efficiencies can be found on that damned moon that trapped me for those long years."
-Excerpted from "Being the Hystories, Those Natural and Un-Natural, Written Down By the Duc De Richelieu, Upon His Return from Travels and Travails Afarr" 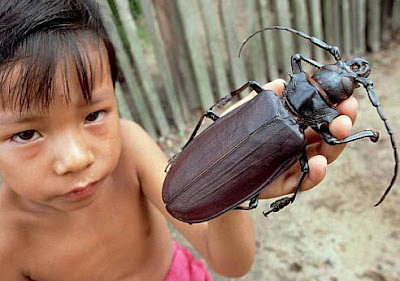 "You buy baby beetle for many gold."

A smaller cousin of the Boring Beetle, these beetles eat rotting vegetable and animal matter. They are usually found in giant trees and abandoned complexes underground. It is said that any who seek the Gem of Fire at the apex of the giant Hjullar's severed head will have to contend with a horde of them. Encountered singly, they are of little threat and animal intelligence. If several have bonded, however, they form a hive mind that can equal or exceed that of a man.

In addition to their hive mind, when a single member of this species consumes whole the brain of a recently dead individual, that individual's consciousness awakes within the beetle. The recently dead's consciousness has complete control of the beetle, but may not understand [he/she] is no longer in [his/her] own body until such is explained to [him/her]. The consciousness will fade at a rate of 1 INT point every four hours, until the beetle returns to its former state as a dumb animal.
If two or more of this species consume the brain, it is simply food and the consciousness is truly dead. After the brain is consumed, the individual may not be resurrected by anything short of a Wish spell. Some societies use captive members of this species to remove truly dire individuals from the prospect of magical resurrection. 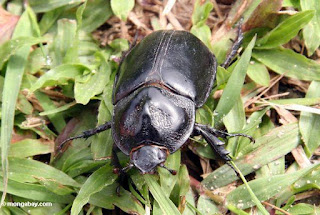 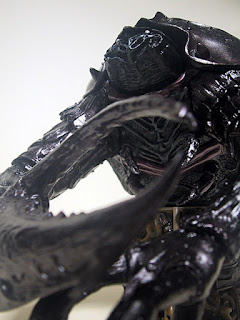 Some overly cruel or sentimental witch has been known to cast the following spell when she encounters beetles with the consciousnesses of other creatures. She has taught it to others. This has been used once to tie a traitor's consciousness to his severed head, which was then placed on the spiked gates of the Dread Wizard King, Mocata. The witch who brought this spell to the Forgotten Moon counts it as one more offense against her by That Dread Lord.

Arrest Consciousness - This ritual takes two hours, and a focus creature must be within the ritual circle the entire time. When completed, the consciousness of the spell's focus is magically locked in the physical form it currently holds. This can only be ended if a Remove Curse and Dispel Magic are cast, successively, in that order. The caster of the ritual will know who ended it, regardless of how much time has passed.

Posted by Josietron at 8:11 PM