Sooooo... +Jensen Toperzer 's Wild Mage attempted to use Nahal's Reckless Dweomer to cast Magic Missile, but it opened a planar portal instead because Wild Magic. I rolled entry 54, and rolled that a planar creature DOES show up. I decided it shows up at the end of the round.
Later that round and unrelated, +Reynaldo Madriñan 's second string character, being some Dungeon World class that converted to Paladin, decided to call his bonded mount using that class ability to get some extra beef for the fight. I thought "Hey, how often is this gonna happen while a planar portal is open?" and decided to use my trusty 30% chance of anything to see if the planar creature is caught up in his Paladin call for a mount.
The roll? 16. So yeah. Planar mount. I rolled d4 to see where the critter was from: 1 - Astral Encounters, 2 - Ethereal Encounters, 3 - Psionic Encounters, 4 - some planar table a player had (the first three are in the 1e DMG). I got Ethereal, and Efreeti. GREAT. I freaked at how powerful Efreeti are and rolled on some boring table and got Centaur. Then I decided to, like, combine them. I showed Rey a couple images from the net of stupid flaming centaurs, then found the image below. He fell in love with it so much he wants it to be his PC and have the Paladude be its henchman instead of the other way around. Sweet. Here's a weird raceclass. 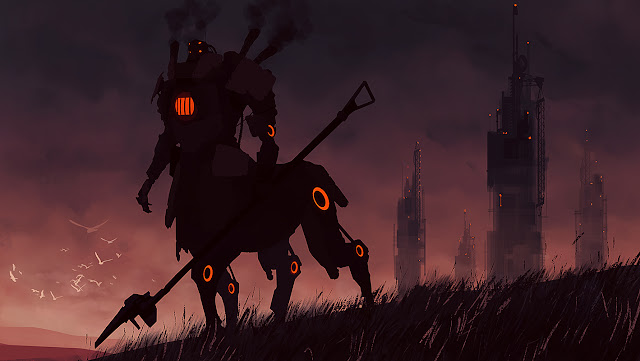 By the swell illustrator Matti Marttinen. Here's his DeviantArt.

Hit Dice, Attack, Saves, Weapons: As a Fighter
Level Advancement: As a Magic User
Armor: Mechtaurs cannot wear armor, as it blocks important intake valves and exhaust vents. They may have custom armored plates made at the rate for masterwork armor, but they have their natural AC or the armor's and do not get the benefit of both.
Hoof Attacks: 1d6 damage, 1 attack at level one, 2 at level five; cannot attack with weapon in same round
Movement: same as human in combat, but 1.5 times that of a human out of combat if running

Hot to Trot: Mechtaurs can utilize their internal heat in the following ways, a total number of times per day equal to their level:
at level 2, can heat its own surface and any metal it is touching, as per the Heat Metal spell. Grappling with a Mechtaur a few rounds into combat is a thing to be feared. At level 4 this can be used like the Flame Arrow spell
at level 3, can form a choking cloud of smoke that spreads 20 feet in all directions and lasts for 1 round per level. All sight, even Infravision, is ineffective in or through the cloud. All within the cloud take -4 penalties to Strength and Dexterity. These effects last for 1d4+1 rounds after the cloud dissipates or after the creature leaves the area of the cloud. Spell resistance does not apply.

The Fire Inside: Damage to the PC from fire, heat, and cold are reduced by a number of points equal to twice the PC's level. Cold- and Water-based creatures have a penalty of 2 to their morale against Mechtaurs.

Sure-Footed: Being a quadruped makes you about twice as difficult to knock off your feet, and makes you more sure-footed than a biped on difficult terrain; the DM will determine the exact effect of this.

Other Features and Limiations:
Glowing: you constantly shed light equal to that of a candle or small fire; it is extinguished with your death. It can only be disguised if your eyes, chest, and all your joints are bound with thick cloth treated with tar. The glowing areas can be painted over, but it is painful until the paint is removed. The Mechtaur can see through any of it's glowing areas, and thus has excellent peripheral vision and is difficult to blind.

Clunky: -4 or -25% to any attempts to be stealthy, quiet, hidden, or unobserved. You are an 8 foot metal beast belching smoke, sorry. The above is a baseline; the penalty can increase depending on the situation.

Second-Hand Smoke: creatures on your back cannot see ahead of you, due to your size and the smoke coming out of your exhaust pipes.

No Construct Immunities: You're not a construct, exactly, and are vulnerable to undead and may contract diseases if the DM says so. You gotta eat, although for you this means burning organic stuff (trees, plants, and garbage may count, but not rotting flesh or corpses) in your central fire.

Fall Down Go Boom: When you die, a Fireball (as the spell) goes off, centered on your body and using your level as the caster level.

Efreeti Engine: An Efreeti sleeps in your engine, fueling your fires and giving you life. The Efreeti prefers this slumbering state, and will be very angry at anyone waking/freeing it by killing you. There is a 50% chance it will attack any nearby creature; if not, it will focus on the creature that killed the Mechtaur.

Ecology
An age ago, seven powerful wizards were banished to a land known as Hephaestus. They enslaved the native races, and through magical experimentation made them into weapons of war against each other. Whether the Mechtaur were once something else or were created as they are is lost to history. Eventually, all the wizards had either been murdered or ascended to other states of being.
The creatures left have maintained military, warlike societies and continue to fight for territory in rigidly ordered groups. Young, rebellious members of these races have taken to hanging around areas where portals are known to open, areas where the planar fabric is weak. They hope to be pulled through to another existence away from the rigid hierarchies and lost purpose of their homeland.
However rebellious at home, Mechtaurs abroad in the planes are known for being honorable, confident, and brave. They are not humorless, however, and are often quick with a joke. Their sense of humor tends to the bawdy and flirtatious. They can sometimes be cruel or forget that fleshy creatures are not as resilient. Even those seeking peace have little patience with cowardice, as they were all raised warriors.

Mechtaurs stand about 8 feet tall, and often have spears of their native land, made from one large solid piece of metal. Their native communication is via smoke and light patterns, but they usually know a halting form of common. Much mirth is usually made of choosing their verbal name.
Posted by Josietron at 10:22 PM