A bunch of us on G+ filled in the hexes on a map and called it Hexenbracken because Zak S had a good idea and then someone else had the good idea to keep adding detail to it and so like the Overlook Hotel, once you get in, you never really leave.
Here's one of mine:

1321
There 7 Penlaggans here with their gut strings accidentally tied together, floating out of weapons' reach. If one unties them and lets them leave, they will tell you: Leave a blood sacrifice in hexes 1121 1521 1219 1323 and 1419, then 1121 again, then return here. A demon will be summoned and have to do your bidding for a day. (Obviously they're describing topographical features and not giving pcs hex numbers, but you get the idea.) 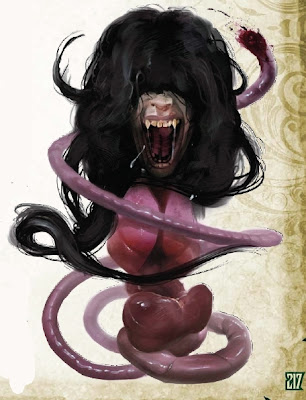 Apparently I don't know how to spell Penanggalan!


A General in the Bleak Wars sought to end the conflict by having the wives, daughters, and consorts of his enemies kidnapped, ransoming for peace. He was ignored and defeated in battle, leaving him with a marginal force and seven women trapped in his tower. At the end, as his last stronghold was falling, he had them eviscerated - the stories say it took up to five strong men to hold each women still.

These women were nobles, a general, a sorceress; women who bowed to no one and were denied nothing. They did not bow to Death and would not be denied existence. The Seven rose again as Penanggalan.
They drove the General and his men insane before consuming them, then moved on to their own relatives who had not saved them. Some say it was truly they who ended the Bleak Wars, and in this the General got his wish. Others say it is more complicated than that.

More recently, a nameless traveller used their fury to blind them, and tricked them into tangling with one another. The Seven will calm their fury and leave peacefully if untangled, but it is gory, dangerous work. The current location of their bodies is unknown. Their heads float over a barren stretch of dirt between forests, so they can easily float out of reach and observe any who come near.
The Demon they know how to summon and bind is indeed the General, transfigured after death. They delight in seeing him suffer at menial tasks, or get defeated and summoned again. Those carrying out their instructions are typically safe from the Penlaggans themselves, who in slow times feed off the sacrifices once the ritual is successful.
Keep in mind that they really want to get untangled, and don't necessarily like each other. They really will look favorably upon anyone freeing them, unless also attacked by them. 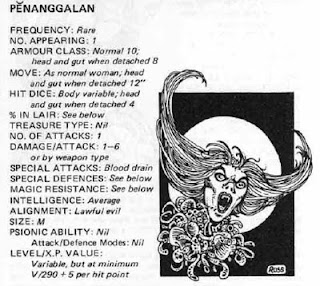 Grrnuh: Lizard-Woman head, can spray the slime detailed in the Entrail ability up to 30 ft. from her eyes; proud warrior

Ssstithgor: Leech-faced Halfling head, Bite: 1d4, same damage every round until magically healed or given serious medical attention, STR check to free oneself from bite but even then it continues to bleed; sees everything as a commercial transaction

Strolnyra the Unforgiving: White Elf Head, can cast spells as a 7th level Magic User and a 3rd level Cleric (or if you have a Sorcerer or Witch class, use that); master strategist.

Aaeron: Half-elf head, Command 4x/day as cast by 4th level; pretends innocence and humor; hated by the other 6.

Som Megat: Human head, can become Invisible at will. Aloof, charismatic, longs for being human but merciless toward them.

I'll leave the Demon ex-General for you to stat up!

Posted by Josietron at 2:20 PM