Before the horrible southern tunnels were blown up, +Erik Jensen 's Bumphrey looted this painting: 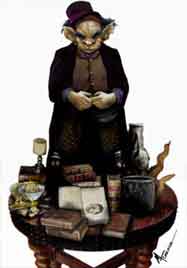 A portrait of a Goblin King of old. Bumphrey and +Chris H 's "Magician" found and looted an ancient Mining Goblin throne room, taking all sorts of loot, including this statuette: 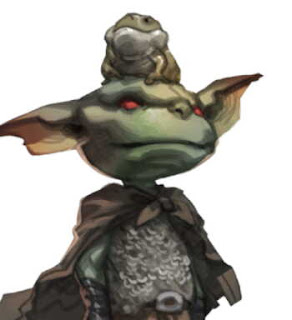 They found a door with old goblin runes, and more recent elven runes, indicating an Ice Demon was trapped within. The party left it alone. Then the throne room got blown up along with the rest of the horrible southern tunnels, killing the awful Afar the Green but freeing the Ice Demon, EMFLWEM.
Every since that happened, the frog and eyes of the statuette have been glowing weirdly.

Lacon the Fire Lizard, incidental ally of convenience, has called Bumphrey and any brave souls that will accompany him to meet up on a grave matter of immediate importance. As in, HURRY! and Bring the painting and statuette!
You see, the objects on the table in the painting are a code that, if deciphered, tells of a ritual to banish or bind demons to one's service. Many people are looking for that painting, and all of them bad dudes. Lacon believes the ship between Targenmoor and Baksheesh might have something in its memory banks to decipher the painting. He also believes a Mining Goblin historian who might know has a secret library under the mountain near Mocata's Stronghold. 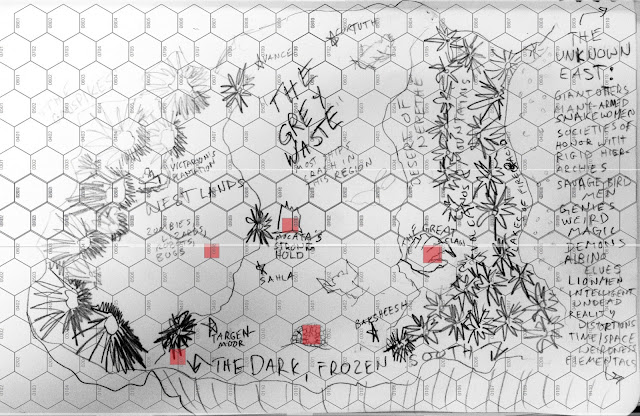 Do you go East, and risk the demon finding you and destroying the painting (and eating you?) Do you go North, and risk being brought in for suspicious activity by Mocata's Justicars of Magic? Either way, it's a hard race against time over grey steel sand with a demon and who knows what kind of underworld cutthroats at your heels?

Oh, also, the Mining Goblins will pay a lot of money for the stuff Bumphrey has.

Meanwhile, +Pearce Shea 's new guy Bento is looking for the underground, illegal (by Mocata's law) cult of Vanamanaghor-Knife-In Darkness, of whom the people love to tell stories but no one openly worships.
He's going to have to figure out how much money he's willing to spend to carouse, then roll 1d8 on this table. +1 for every 100GP:
1) In trouble with local authorities; imprisoned or owe 2d4x100 GP to local underworld figures

2) Mocata's Goat-Men heard you asking shady stuff, and you're now in a prison cart headed for his stronghold; your stuff is in a cart somewhere in the same caravan.

3) Mocata's Justicars have heard of you, and are seeking you for questioning.

4) You got so drunk you forgot the goal; roll on Jeff Rients' Carousing Table

5) You found them, embarrassed yourself, and they disappeared; -1 on this table next time.

6 -7) Next time you're in a Kalak-Nur game, you start in one of their secret places of worship, surrounded by Assassin-Priests and their flunkies; if they don't like what you're saying, you might get killed. If they do, you might get conscripted into the faith and have some responsibilities.

8) You remember finding them, but you're not sure what happened; you wake up locked inside some rich person's vault and there are guards outside.

9-10) You don't remember much of the meeting, but you think it went well; anyway, they are receptive to future advances and you know how to contact them.
Posted by Josietron at 6:55 PM