Loook, a more random, and probably more fun version of the class I wrote up the other day where foolish young things hook themselves up to big machines! Based on Zak's Random Alternate Fighter. In this version, the bummer-loss-of-self is not reinforced mechanically. This is a lot more cartoon show. 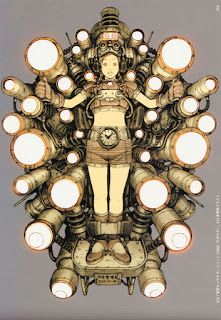 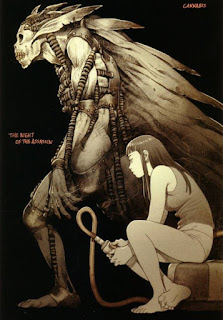 You and the robot you control are mostly counted as one guy.
Start with the HP and saving throws of a 0-level LotFP Fighter. At 1st level and every level thereafter, get your HP as normal, but instead of Saves and To Hit improving on a schedule, roll on the following table.
But first - armor; you can't wear any. You gotta keep some skin showing so the robot will respond to your electrical field and shit, and you gotta have quick access to the tools you have strapped all over you in utility belts and such, 'cause your robot needs things tightened and adjusted and repaired all the time. So your AC? It's 12 + 1d4.
What the shizz does that mean? It means without your robot, you have an AC of 12, and your robot's AC is different depending on where it's hit. In the interest of simplicity and time, we're abstracting some things here. So when some asshole swings at you, you roll 1d4 and add it to 12 and that's your AC for that hit. The swingy-ness of this is to reflect the fact that there's a lot that goes into whether asshole hits you, a solid metal plate on your robot's chest, a joint where your robot is weaker, etc. We don't have time to calculate all that in an LotFP or Basic D&D style game so 12 + 1d4 it is.

The following table reflects you discovering things about this big weird machine you've strapped yourself to, and maybe finding inventive ways to attach scrap to it.
OK! At First and every level after, roll twice:

53: Charge the batteries: If you take no action for one round, your next hit is double damage, but your AC is -2 the following round. Every time you roll this again, add +2 damage for that hit.

54-55: Hiding behind the big guy: +2 to breath weapon saves, and you get one round per day where any area of effect thingy (breath, trap spraying fire, etc) doesn't hurt you. Roll it again and additional +1 to the save and one round per day.

56-57: Lots o Hands; Most of the time during combat you are concentrating on not getting fragged, but once per combat you can take an extra action (including attacks). One more for every time you roll this. Divide combat bonus and such as you see fit.

60-61: Robots shall be splintered! Or you. You can have a limb be incapacitated instead of taking a hit. Once a day for every time you roll this result. Robot limbs can be repaired in 1 week minus 1 day per level; less than 1 day is by hours.

62-63: Quantum Folding; your robot can be folded up and stored out of sight in a normal adventurer's pack, and POP! be ready to fight at a moment's notice. Roll this again and you can summon your robot to you from anywhere, once. Roll again for another summon, etc.

64-65: Oxygen Supply; no air, bad air, poison gas? No worries. As long as you've got your robot handy, you have a breathing mask on and 10 minutes of fresh air. +10 minutes for every reroll.

68-69: MEGA-PUNCH! On a successful hit, you do your damage as usual and knock a human-sized or smaller opponent back 10 feet. Try it again and they get to save or make a STR check to resist or however the GM wants to do that. If you roll this again, you get two punches before they save or whatever.

70-71: NEGA-PUNCH! Once per combat, on a successful hit, you warp reality and cause your opponent's shadow to animate and attack them for one round. If they don't spend the round defending themselves, they take their normal damage, interrupting spells if they are casting any. Roll this again and it happens for two rounds, etc.

72-73: KO!!! On a successful hit, you do damage as usual and knock a human-sized or smaller opponent prone. If you try it again on the same opponent, they get to save or STR check or whatever. Roll this again and you get two knockdowns before they get the save thing.

74-75: FLAMING FIST! On a successful punch, you do usual damage plus 1d4 fire damage. Roll this again and they take the fire damage next round, too.

76-77: THE SHOCKER: Once per day on a successful hit, you do normal damage and deliver the effects of the Shocking Grasp spell. Roll this again and do it twice per day.

80: EVEN MORE METAL: Your crits do triple frikkin' damage. Roll again and quadruple.

82-83: FLYING FIST: Your robot can fire off a body part to make a missile attack once per combat, but you gotta go get it later. Roll this again and the body part is attached by a tough metal cable, so it returns next round. Rolling this after that gives you another use per combat.

84-86: You hit it like this, you hit it like that, you hit it with a wiffle ball bat: if you crit something with a head and it's level/HD is equal to or less than yours, you knock it's head off and it goes flying. Roll this again and you can decapitate things one level higher, etc.

87-88: ROCKETS: your robot can carry you and fly your movement rate per round. Roll this again and you can carry another person. (One heavily encumbered person counts as two.)

89-90: Fission Food: your connection to your robot sustains you; you get energy from it's reactor core and can go a week without food. You still need to eat occasionally. Roll this again and gain another week, or your robot has a food replicator and you can make 1 meal for another creature no matter where you are.

91-92: Return of the son of Lots o Hands: you can Pick Pockets as a Thief/Specialist of the same level, and once per combat you can attempt to do so while your robot hits someone. Roll again and get another use per combat or 10% bonus.

93: Strength of Metal: radiation from your robot has increased your Strength by 1.

94: Radiation from your robot has increased your CON by 1.

96-97: Force Fields: Once per day you have the effects of the Shield spell. +1 use per day for every time you roll this again.

98: SEISMIC: Your stomps really stomp. Once per combat you can knock everything 15 feet in front of you prone if they fail a reflex check or Breath save. Roll again and they don't get the save the first time. Roll again and you get one more use per combat.

99: EVEN MORE SHOCKING: once per combat you can do Chain Lightning. Roll again for another use per combat.

The DM should be open to the player replacing some of these entries with abilities he or she specifically desires, especially if the character endeavors to gather appropriate parts in-game to add to the robot.
If the character gathers the appropriate parts from monsters or seeks out how to build them, the player can replace an entry on this list with an ability he desires, whether a monster ability, spell effect, or something of his own devising. If it's really awesome or the character has gone through exceptional effort, perhaps he may just get the ability when the next level is gained instead of rolling on the table.

If the character has spent early levels gathering sufficient materials from defeated foes, AC improves to 12+1d6 at 3rd level.
Posted by Josietron at 9:26 PM