Trouble in the Great Empire of the Flaming Moon

This is some writing I did to start fleshing out the fantasy asia campaign I want to run this summer. I'm still at least two months away from running anything related to this, but thought it couldn't hurt to put this out there and see what people think. I wanted a document to work backwards from, essentially, in making some decisions about the setting.
Currently I'm thinking there will be an all-native, new character, non-FlailSnail party and some sessions run for "weird foreigners", IE FlailSnailers. The actions of one group could affect the other.
I'm currently debating whether to make the native group BRP/CoC Characters (probably not), how much supernatural to have on the PC side, and how much outright warfare there should be.

After a long period of stability, the Great Empire of the Flaming Moon is beset by troubles from every quarter. The Emperor seeks to resolve these troubles by the time the Flaming Moon rises in the sky, a mere six months from now. 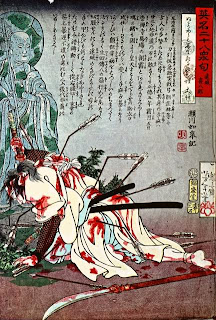 -Last year, several Daimyo to the South broke allegiance to the Empire, forming Free Territories. One of these is even ruled by farmers who have done the unthinkable and deposed their Daimyo! It is said they ignore every edict of the previous two Emperors, and allow the blaspheme of Hengeyokai in their cities. The greatest Wu Jen come from the province now ruled by a coalition of Farmers. The Samurai there now take orders from farmers! It is feared they may start training Wu Jen more frequently than the traditional one every 10 years. 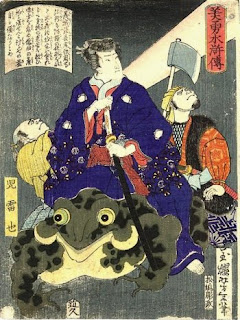 -The Islands of Chan to the West have stopped sending tribute and cut off communications. Samurai sent to investigate have not returned. The two prevailing theories are that the Chan have declared complete independence or that they have allied with the Shou, who occupy a large landmass further West. The greatest unarmed warriors come from Chan.

-The Shogun has put it out in certain discreet quarters that his sages predict: in the month before the Flaming Moon rises, the God Kashima will take a nap, allowing the great catfish Namazu to thrash about and cause an earthquake. He desires to not have to add to the Emperor's woes. If any might know how to seek the Catfish God or contact the Kobrokuro, they should enquire at the Gate of Forgiving Flames. (If an earthquake does occur, the Empire may lose many palaces and the tradition of giving great sums to the lower classes to appease Namazu must be observed.)

-Sightings of ghosts and other spirits are at an all time high. Respected Sohei Suneyoshi requests brave and discreet souls to investigate some of these. The Emperor is highly paranoid of the supernatural. 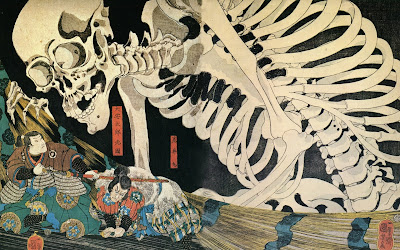 People "outside" the above system but respected by it:
Priests

People "outside" the above system judged against each other but not automatically respected:
oiran, tabu, geisha (prostitutes and courtesans, could be equally male or female)

Posted by Josietron at 9:34 AM