So there are these weird sisters, two are medusae and one is a void demon, and some PCs made nice with them a long time ago because while they cannot leave their room, they can open door to anywhere if you ask them nice and pay their price.
So they asked some PCs for some orphans to raise. And the PCs needed a door to save a hundred other orphans, so they agreed. And the Sisters can send the orphans they kept to offer a home and vocation to other orphans, and so these things should start showing up in the FLAILSNAIL-o-verse as both PCs and NPCs, friend and foe.

Ask your DM before starting a character with this class. Respect it if they say no. A character starts as this class, they cannot switch to it.
I figure these would be encountered more often as NPCs, especially in any game involving planar creatures, reality rifts, etc. 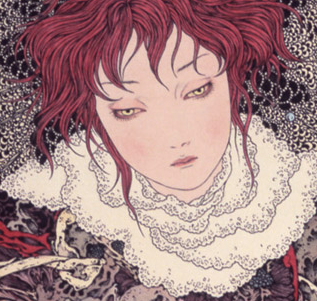 You were raised in an extradimensional space by three weird sisters, and taught the ways of the Void.  You stared into the spiral void that was Mother's head until you saw truth there.
You are the left hand of nothingness, the meaning imposed on empty space by an uncomprehending mind, and the hollow center of that meaning. You are the fear in every heart that it all means nothing.
You are the quiet, confident look that happens after it has been accepted - that all means nothing, and thus we are free. 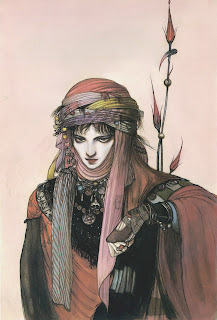 Belief in Nothing: Anyone attempting to know or detect your alignment through means magical or otherwise must save VS Paralysis (at a penalty equal to your level) or be paralyzed with madness for a number of rounds equal to your level, as their feeble mind attempts to understand your allegiance to nothingness.

The Void of Memory: At level 2, you may cause a number of creatures equal to your level that you can currently see to forget about the existence of an object you can see. The affected creatures Save VS Spell; if they succeed, the effect lasts your level in rounds. If they fail the save, the effect is permanent. If they object is magical and the save is failed, the affected creatures may attempt another save after a number of rounds equal to your level. 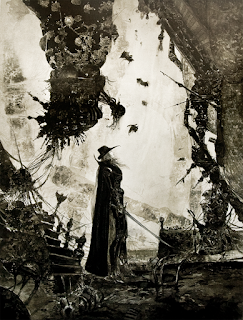 The Void Contains All Things: Reality is nothingness, all is the same, time, space, and being are illusions. You can manipulate reality to bring one specific item to you at any time. You can also cause this object to fade from reality at any time. If the object is destroyed by another, however, it is gone. The item must be smaller than your level in cubic feet.
The item is selected and placed into the Void in a special ritual performed by the Void Knight. Once selected, the item can only be changed by performing the ritual again. The Ritual consumes precious metals equal to your level x 1000 GP. 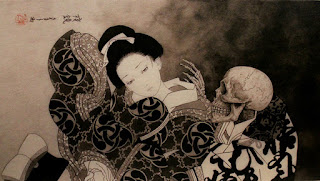 Void Knights may use any weapons or armor. Heavy armor encumbers them as one armor type lighter.
While wearing light or no armor, they may Pick Pockets, Hide in Shadows and Move Silently as a Thief of their level.
When a Void Knight dies, they simply disappear, leaving a patch of darkness behind.
Posted by Josietron at 9:24 PM