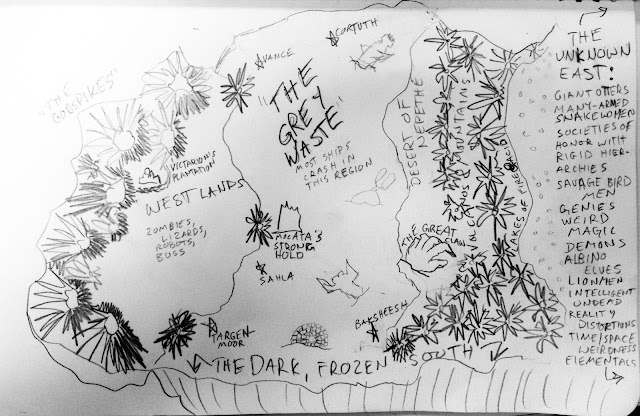 Those notes about "The Unknown East" are rumors your PCs have heard, but aren't relevant to anything at the moment.

Moving Left to Right:
1. The Godspikes - soaring mountains descending into the ocean. Steep cliffs, riddled with tunnels and caves, some tunnel systems leading all the way across the continent underground.
2. WESTLANDS - some kind of plague has left tons of zombies here. Very dangerous to travel through. Far more vegetation than elsewhere. Underground is giant bugs and lizards and weird old mining facilities with alien tech.
3. Victarion's Plantation - Victarion is either a man wearing armor or a robot. He grows food here en mass with hundreds of droids as labor. Distributes across Kalak-Nur at exorbitant prices. ALL GOLD IN THIS REGION IS "VICTARION CREDITS" good for a certain amount of food or supplies. Converts to normal gold when taken off world.
4. THE GREY WASTE - where most of the population in this region is. Most ships crash here. Colonies form around the ships, using whatever resources survive the crash. Some have lasted hundreds of years by now. Named for the seemingly endless stretches of grey sand between colonies. Sandworms sometimes rise up and eat lone travelers.
5. Mocata's Stronghold - no longer recognizable as a ship, this more resembles Downton Abbey, inside and out. Think old British countryside mansion, but defensible. Mocata and his goat-men enforce his arcane laws from here. He regulates magic use in Kalak-Nur with an firm hand, being especially harsh on necromancers. Mocata refutes the rumors that his stronghold is slowly sinking into the sand. It does tilt at an odd angle, though.
6. Targenmoor, Sahla, Cortuth, Vance, Baksheesh - established communities formed around larger ships that have some trade with each other. Outside of these communities, murder and depravity is common. Scattered in between are smaller settlements, tribes, and cults in a bitter struggle for survival. Vance has a major outpost of Mocata's Justicars, but is also rumored to have the most heretics, witches, cults, and lawbreakers.
7. The Great Claw - a massive stone hand that emerges from the ground in The Grey Waste and has its fingertips in The Desert of Nepethe. Superstition holds that it is a great titan who will emerge and destroy any force threatening to destroy the town of Baksheesh nearby. Baksheesh is thereby rich, suffering less attacks than other settlements.
8. The Desert of Nepethe - the sand changes from grey to yellow, although at night a purple-green. Those who go wandering here are easily lost, and those who go through it strangely devoid of stories to tell.
9. Past the desert is miles of volcanoes and steep mountains, giving way to massive lakes of fire, lava, and acid. There is a tiny chain of mountains that goes all the way to the Eastlands, passable every 10 years or so for a few months.
10. THE FROZEN SOUTH - So cold even undead simply burst. The land of frost giants and ice kobolds.
Posted by Josietron at 1:53 PM